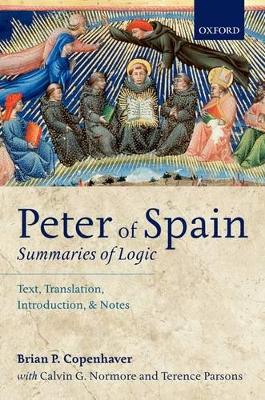 Peter of Spain: Summaries of Logic

For nearly four centuries Peter of Spain's Summaries of Logic (c. 1230) was the basis for teaching logic. The Summaries has extensively and profoundly influenced the distinctly Western way of speaking formally and writing formal prose by constructing well-formed sentences, making valid arguments, and refuting and defending arguments in debate. This new English translation, based on an update of the Latin text of Lambertus De Rijk, comes with an
extensive introduction that deals with authorship, dating, and the place of the Summaries in the development of logic, before providing a chapter-by-chapter analysis of Peter's book, followed by an analysis of his system
from the point of view of modern logic. The Latin text is presented on facing pages with the English translation, accompanied by notes, and the book includes a full bibliography.

» Have you read this book? We'd like to know what you think about it - write a review about Peter of Spain: Summaries of Logic book by Brian P. Copenhaver and you'll earn 50c in Boomerang Bucks loyalty dollars (you must be a Boomerang Books Account Holder - it's free to sign up and there are great benefits!)

A Preview for this title is currently not available.
More Books By Brian P. Copenhaver
View All

Magic and the Dignity of Man: Pico della Mirandola and His Oration in Modern Memory
$92.07 $93.95