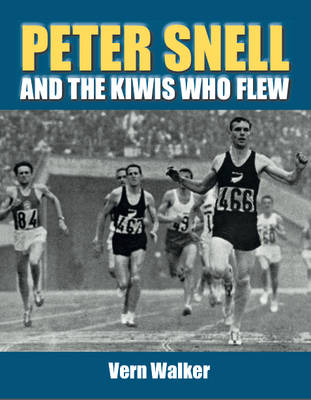 Peter Snell and the Kiwis who Flew

Description - Peter Snell and the Kiwis who Flew by Walker Vern

This was the great era (1956-1965) when New Zealand middle and long-distance runners showed a clean pair of heels to the world...Peter Snell, Murray Halberg, Bill Baillie, Marise Chamberlain, John Davies, Jeff Julian, Barry Magee and Neville Scott. It was a decade when 'black' signalled a tough time for opponents everywhere. Amazingly, a grand total of 23 world records or world best times were set or equalled by New Zealand runners. In the Olympic and Commonwealth Games arenas Kiwi runners won medals of every colour - gold, silver and bronze. A total of fourteen medals, with five gold medals won by the incomparable Snell. Kiwi runners climbed to the top of the podium in such far-flung places as Cardiff, Dublin, London, Boston, Honolulu, Houston, Los Angeles, Portland, San Diego, Toronto, Cape Town, Durban, Pretoria, Fukuoka, Tokyo, Cologne, Helsinki, Oslo, Rome, Stockholm, Turku, Zagreb, Brisbane, Melbourne, Perth and Sydney. It was a decade when Peter Snell and a band of Kiwi runners took on the world.

» Have you read this book? We'd like to know what you think about it - write a review about Peter Snell and the Kiwis who Flew book by Walker Vern and you'll earn 50c in Boomerang Bucks loyalty dollars (you must be a Boomerang Books Account Holder - it's free to sign up and there are great benefits!)