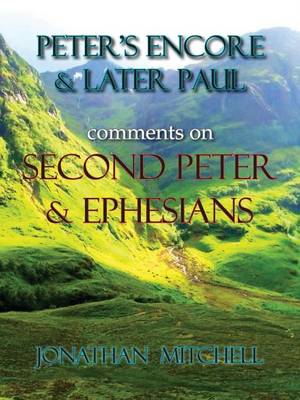 THIS VOLUME is a verse-by-verse commentary on Second Peter and Ephesians. It is based upon, and contains, a fresh, expanded translation of these letters, by the author, which are a part of The New Testament, God's Message of Goodness, Ease and Well-being... Peter's letter and Paul's sermon unveil dynamic perceptions concerning God's plan of the ages. This mystery which from the beginning was hidden in God is made known in Paul's theme of uniting all things in Christ. This fresh, clear-cut compilation explores what God's reign looks-like, the realities of our life in Christ within the called-out, covenant communities, and humanity's positive destiny and expectations. Additionally, Peter's insights and admonitions of personal and corporate growth in God's love are explored in detail. The first century context of his judgment prophecies are considered in terms of the Old Testament apocalyptic character of the language that he used. The straightforward treatment of both texts, and the faithfulness to the semantic range of the Greek meanings, lead the reader beyond traditional opinions and into a clearer understanding of God's word. In addition to comments on the verses, alternate renderings of the texts and optional meaning of the Greek words are on offer, together with explanations concerning the functions of the noun cases in prepositional phrases that have no expressed preposition in the text, and the grammatical implications of the verb tenses which the authors chose to use. Also incorporated into this book are multiple quotes from various scholars, comparisons of these letters with other NT texts, and references to appropriate OT passages. The author has added bonus studies on the topics of: God's kingdom, Jesus' warnings of judgment, Paul's meaning of the word "anathema," the current idea about "spiritual warfare," and the interpretation of 1 Cor. 15:22. Also provided is an expanded translation of Psalm 23, from the Septuagint (LXX), lending an insight into how Jewish scholars of BC Alexandria read this ancient affirmation of faith in Yahweh.

» Have you read this book? We'd like to know what you think about it - write a review about Peter's Encore & Later Paul, Comments on Second Peter & Ephesians book by Jonathan Paul Mitchell and you'll earn 50c in Boomerang Bucks loyalty dollars (you must be a Boomerang Books Account Holder - it's free to sign up and there are great benefits!)


A Preview for this title is currently not available.
More Books By Jonathan Paul Mitchell
View All