Philosophy and the Martial Arts

Description - Philosophy and the Martial Arts by Graham Priest

This is the first substantial academic book to lay out the philosophical terrain within the study of the martial arts and to explore the significance of this fascinating subject for contemporary philosophy.

The book is divided into three sections. The first section concerns what philosophical reflection can teach us about the martial arts, and especially the nature and value of its practice. The second section deals with the other direction of the dialectical interplay between philosophy and the martial arts: how the martial arts can inform philosophical issues important in their own right. Finally, because many of the notable martial arts are of Asian origin, there are particularly close links between the arts and Asian philosophies - and Buddhism in particular - and therefore the last section is devoted to this topic.

The essays in this collection deal with a wide range of philosophical issues: normative ethics, meta-ethics, aesthetics, phenomenology, the philosophy of mind, Ancient Greek and Buddhist thought. By demonstrating the very real nature of the engagement between the martial arts and philosophy, this book is essential reading for any serious student or scholar with an interest in the martial arts, Eastern philosophy, the philosophy of sport, or the study of physical culture.

Other Editions - Philosophy and the Martial Arts by Graham Priest 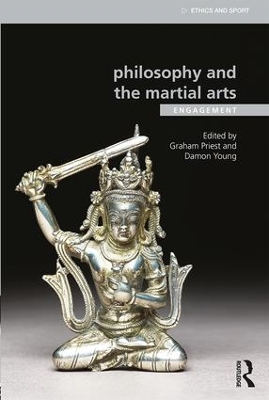 Book Reviews - Philosophy and the Martial Arts by Graham Priest

» Have you read this book? We'd like to know what you think about it - write a review about Philosophy and the Martial Arts book by Graham Priest and you'll earn 50c in Boomerang Bucks loyalty dollars (you must be a Boomerang Books Account Holder - it's free to sign up and there are great benefits!)

Graham Priest is Distinguished Professor of Philosophy at the CUNY Graduate Center, and Boyce Gibson Professor Emeritus at the University of Melbourne. He is well known for his work on logic and paradox, metaphysics, and the history of philosophy. Priest is the author of numerous books and has published articles in nearly every major philosophical and logical journal. In addition to his work in philosophy and logic, he practices Karate-do and is 3rd Dan, International Karate-do Shobukai; 4th Dan, Shi'to Ryu, and an Australian National Kumite Referee and Kata Judge. Damon Young is an Honorary Fellow in Philosophy at the University of Melbourne, where he was a Research Fellow in Aesthetics from 2005-2007. Damon is the author of the books How to Think About Exercise, Voltaire's Vine, and Distraction. He is also co-editor, with Graham Priest, of Martial Arts and Philosophy: Beating and Nothingness. Damon has published in various scholarly journals, including Philosophy Today and Philosophy East and West, and in 2013 he was awarded the Australasian Association of Philosophy's Media Prize for his work in public philosophy. He holds a shodan rank in Goju Ryu Karate-do.

A Preview for this title is currently not available.
More Books By Graham Priest
View All

Sociative Logics and Their Applications: Essays by the Late Richard Sylvan
$226.80 $252.00