Philosopher, physicist, and anarchist Paul Feyerabend was one of the most unconventional scholars of his time. His book Against Method has become a modern classic. Yet it is not well known that Feyerabend spent many years working on a philosophy of nature that was intended to comprise three volumes covering the period from the earliest traces of stone age cave paintings to the atomic physics of the 20th century - a project that, as he conveyed in a letter to Imre Lakatos, almost drove him nuts: "Damn the ,Naturphilosophie."

The book's manuscript was long believed to have been lost. Recently, however, a typescript constituting the first volume of the project was unexpectedly discovered at the University of Konstanz. In this volume Feyerabend explores the significance of myths for the early period of natural philosophy, as well as the transition from Homer's "aggregate universe" to Parmenides' uniform ontology. He focuses on the rise of rationalism in Greek antiquity, which he considers a disastrous development, and the associated separation of man from nature. Thus Feyerabend explores the prehistory of science in his familiar polemical and extraordinarily learned manner.
The volume contains numerous pictures and drawings by Feyerabend himself. It also contains hitherto unpublished biographical material that will help to round up our overall image of one of the most influential radical philosophers of the twentieth century.

Other Editions - Philosophy of Nature by Paul K. Feyerabend 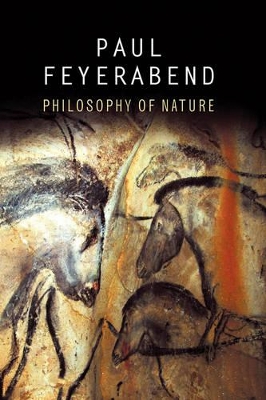 » Have you read this book? We'd like to know what you think about it - write a review about Philosophy of Nature book by Paul K. Feyerabend and you'll earn 50c in Boomerang Bucks loyalty dollars (you must be a Boomerang Books Account Holder - it's free to sign up and there are great benefits!)

Paul Feyerabend (1924-1994) was Professor of Philosophy at the University of California, Berkeley.

A Preview for this title is currently not available.
More Books By Paul K. Feyerabend
View All