In 1947 Theodor Adorno, one of the seminal European philosophers of the postwar years, announced his return after exile in the United States to a devastated Europe by writing Philosophy of New Music. Intensely polemical from its first publication, every aspect of this work was met with extreme reactions, from stark dismissal to outrage. Even Schoenberg reviled it. Despite the controversy, Philosophy of New Music became highly regarded and widely read among musicians, scholars, and social philosophers.

Other Editions - Philosophy of New Music by Theodor W. Adorno 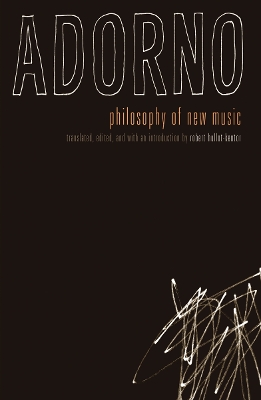 » Have you read this book? We'd like to know what you think about it - write a review about Philosophy of New Music book by Theodor W. Adorno and you'll earn 50c in Boomerang Bucks loyalty dollars (you must be a Boomerang Books Account Holder - it's free to sign up and there are great benefits!)

Theodor W. Adorno (1903-1969) was the leading figure of the Frankfurt school of critical theory. He authored more than twenty volumes, including Negative Dialectics (1982), Philosophy of Modern Music (1980), Kierkegaard (Minnesota, 1989), Dialectic of Enlightenment (1975) with Max Horkheimer, and Aesthetic Theory (Minnesota, 1997). Robert Hullot-Kentor has taught at Harvard and Stanford universities and written widely on Adorno. He has translated various works of Adorno, including Aesthetic Theory.