Documents and critically analyses the photographs that helped strengthen as well as bring down the Eugenics Movement. Using a large body of racial-type images and a variety of historical and archival sources, and concentrating mainly on developments in Britain, the USA and Nazi Germany, the author argues that photography, as the most powerful visual medium of the late nineteenth and early twentieth centuries, was vital to the Eugenics Movements success -- not only did it allow eugenicists to identify the people with superior and inferior hereditary traits, but it helped publicise and lend scientific authority to eugenicists racial theories. The author further argues for a strong connection between the racial-type photographs that eugenicists created and the photographic images produced by nineteenth-century anthropologists and prison authorities, and that the photographic works of contemporary liberal anthropologists played a significant role in the Eugenics Movements downfall. Besides adding to our knowledge of photography's crucial role in helping to authorise and implement some of the most controversial social policies of modern times, this book makes a major contribution to our understanding of the history of racism. Most accounts of eugenics have been written by history of science scholars, with an emphasis on the history of science and medicine. In contrast, "Picture Imperfect" looks at eugenics from the standpoint of its most significant cultural data -- racial-type photography, investigating the techniques, media forms, and styles of photography used by eugenicists, and relating these to their racial theories and their social policies and goals. Indeed, the visual archive was crucially constitutive of eugenic racial science because it helped make many of its concepts appear both intuitive as well as scientifically legitimate. Discussion of the history of the eugenics movement encompasses a wide narrative, including Nazi history, US politics, criminology and prison studies, and propaganda. 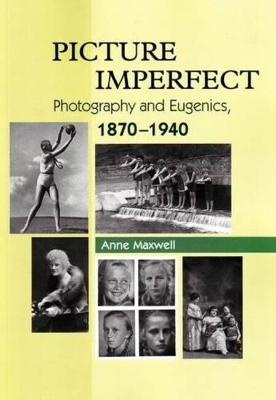 » Have you read this book? We'd like to know what you think about it - write a review about Picture Imperfect book by Anne Maxwell and you'll earn 50c in Boomerang Bucks loyalty dollars (you must be a Boomerang Books Account Holder - it's free to sign up and there are great benefits!)

Anne Maxwell is a Senior Lecturer in the School of Culture and Communications at the University of Melbourne where she teaches courses on literary criticism and cultural studies. She has published widely in the fields of colonial visual cultures and colonial and postcolonial literature.

A Preview for this title is currently not available.
More Books By Anne Maxwell
View All