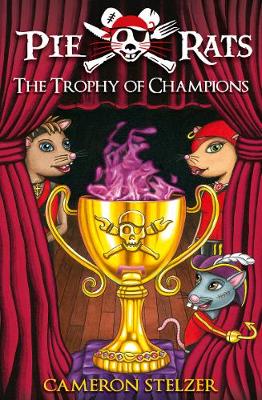 Pie Rats: The Trophy of Champions

Description - Pie Rats: The Trophy of Champions by Cameron Stelzer

Winner of the 2016 IndieReader Discovery Award for Childrens Fiction and the Beverly Hills Book Awards.

"The Trophy of Champions is the fourth book in a delightful series filled with action, mystery, and humor about the adventures of a pirate crew of eccentric rats." IndieReader.

Every four years, the greatest pirate crews on the seven seas gather for an epic tournament of strength and skill. In the Pirate Cup, there is no silver and no bronze, only gold, gold, gold for the winning team, and the legendary Trophy of Champions. As an official entrant, Whisker has more on his mind than victory. He is on the trail of a fox in a black trench coat, and an answer...

Book 4 in the Pie Rats series.

The Pie Rat series of illustrated novels are enthralling reads for children age 8-12. Woven throughout the witty text and detailed illustrations, are messages of hope, perseverance, loyalty, friendship and the importance of family. With a good dash of humour, excitement, and enthusiasm, Cameron's books engage even the most reluctant readers.

» Have you read this book? We'd like to know what you think about it - write a review about Pie Rats: The Trophy of Champions book by Cameron Stelzer and you'll earn 50c in Boomerang Bucks loyalty dollars (you must be a Boomerang Books Account Holder - it's free to sign up and there are great benefits!)

The Smeds and the Smoos
Julia Donaldson
$15.12 $16.99
More Books By Cameron Stelzer
View All