Pip and Posy: The Little Puddle

Description - Pip and Posy: The Little Puddle by Nosy Crow

Pip and Posy are typical toddlers: they are best friends and they have fun.but sometimes, just like any other toddler, they get cross and sad, so sometimes it takes friendship, sharing and understanding - and a cuddle - to make things better. In this book, Pip comes to play at Posy's house. They have such a lovely time after their mid-afternoon snack and drink that Pip forgets he needs to go to the loo, and soon there's a little puddle on the floor. But everyone has accidents sometimes, so Posy mops it up, and lends him some clothes. The next time Pip needs a wee, he does it in the potty all by himself.

Other Editions - Pip and Posy: The Little Puddle by Nosy Crow 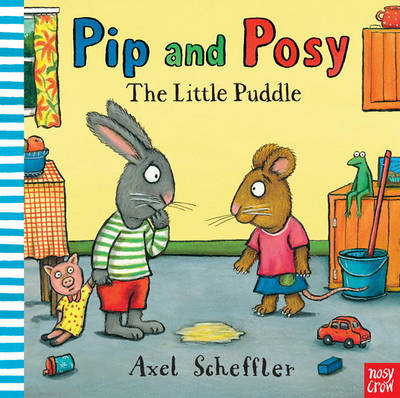 Pip and Posy : The Little Puddle

» Have you read this book? We'd like to know what you think about it - write a review about Pip and Posy: The Little Puddle book by Nosy Crow and you'll earn 50c in Boomerang Bucks loyalty dollars (you must be a Boomerang Books Account Holder - it's free to sign up and there are great benefits!)

Pip and Posy is a great kids book which talks about the all to common subject of toilet training and in particular accidents. When play hard and all day toddlers get distracted, there are way too many fun things to do apart from going to the toilet. But Pip eventually has an accident. His best friend Posy comes to the rescue and cleans up the mess and then offers some clothing.

It’s a great book for toilet training toddlers and a good discussion opener. Axel Scheffler has done a wonderful job with this book as he has done with his well done children s book, The Grullalo.