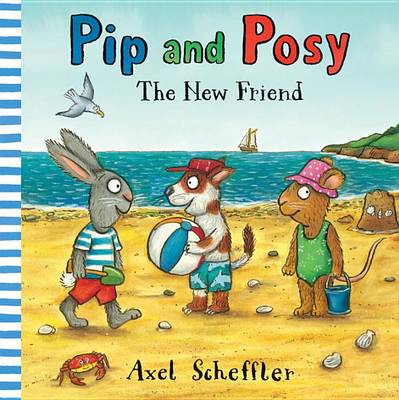 Pip and Posy: The New Friend

Description - Pip and Posy: The New Friend by Nosy Crow

Pip and Posy are having a lovely day at the beach, collecting shells and digging in the sand. But when Posy takes a nap, Pip makes a new friend named Zac. Zac is very cool: he has lots of fun toys and he's really good at handstands. When Posy wakes up, she finds that Pip is more interested in playing with Zac than with her.

» Have you read this book? We'd like to know what you think about it - write a review about Pip and Posy: The New Friend book by Nosy Crow and you'll earn 50c in Boomerang Bucks loyalty dollars (you must be a Boomerang Books Account Holder - it's free to sign up and there are great benefits!)

Axel Scheffler was born in Hamburg, Germany. At school he was good at art, but didn't think of a career in illustration until he won a cuddly purple cow in a drawing competition. He moved to England to learn English and study illustration at the Bath Academy of Art and then set up home in London. He is the author-illustrator of the Pip and Posy series, Flip Flap Farm, and Flip Flap Safari, and has illustrated a number of books, including Julia Donaldson's best-selling modern classic, The Gruffalo, which has sold millions of copies worldwide.