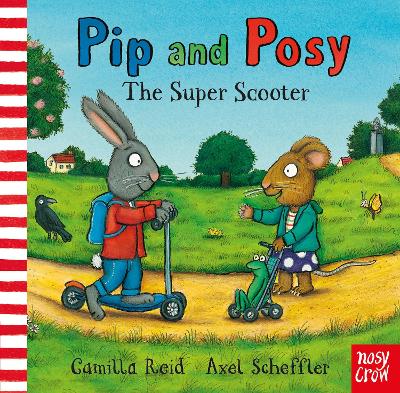 Pip and Posy: The Super Scooter

Description - Pip and Posy: The Super Scooter by Nosy Crow

Pip and Posy are typical toddlers: they are best friends and they have fun.but sometimes, just like any other toddler, they get cross and sad, so sometimes it takes friendship, sharing and understanding - and a cuddle - to make things better.

In this book, Posy snatches Pip's scooter and tries to ride it, but she falls off and hurts her knee. Though Pip was very cross, he comes running to help her. Posy says sorry, and Pip forgives her before they all build a sandcastle in the sandpit where it's nice and soft.

Other Editions - Pip and Posy: The Super Scooter by Nosy Crow Pip and Posy : The Super Scooter

» Have you read this book? We'd like to know what you think about it - write a review about Pip and Posy: The Super Scooter book by Nosy Crow and you'll earn 50c in Boomerang Bucks loyalty dollars (you must be a Boomerang Books Account Holder - it's free to sign up and there are great benefits!)

Pip and Posy: The Super Scooter is a fun book about two typical children and a message about karma and sharing.

When Pip got a new scooter he loved it and would ride it everywhere and even do tricks on it. However when Posy saw the scooter she wanted to try it and try it she did, she hogged the scooter more than her fair share.

The story is simple and easy and quick to read. The message is simple about sharing and friendship. The illustrations are recognizable from the author of the gruffalo, they are colorful and a typical style one will be familiar with.