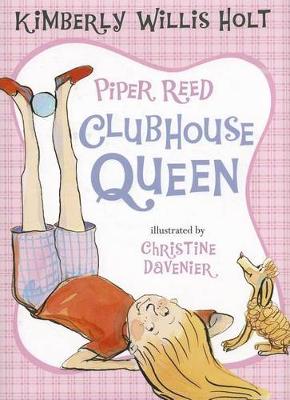 » Have you read this book? We'd like to know what you think about it - write a review about Piper Reed, Clubhouse Queen book by Kimberly Willis Holt and you'll earn 50c in Boomerang Bucks loyalty dollars (you must be a Boomerang Books Account Holder - it's free to sign up and there are great benefits!)

Kimberly Willis Holt is the author of the Piper Reed series, including Piper Reed, Navy Brat, Piper Reed, Clubhouse Queen, and Piper Reed, Rodeo Star. She has written many award-winning novels, including The Water Seeker and My Louisiana Sky, as well as the picture books Waiting for Gregory and Skinny Brown Dog. A former Navy brat herself, Holt was born in Pensacola, Florida, and lived all over the U.S. and the world--from Paris to Norfolk to Guam to New Orleans. Holt long dreamed of being a writer, but first worked as a radio news director, marketed a water park, and was an interior decorator, among other jobs. A few years after she started writing, her third book, When Zachary Beaver Came to Town, won a National Book Award for Young People's Literature. She resides in West Texas with her family. Christine Davenier has illustrated numerous children's books, and won a New York Times-Best Illustrated Award for The First Thing My Mama Told Me. She lives in Paris, France.

A Preview for this title is currently not available.
More Books By Kimberly Willis Holt
View All