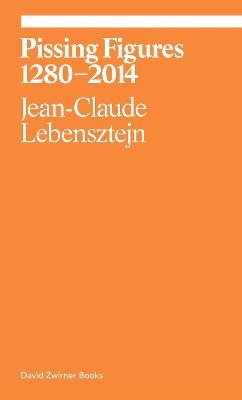 Lebensztejn is one of France's best - kept secrets. A world - class art historian who has lectured and taught at major universities in the United States, his work has remained almost entirely in French, his American audience limited to a sma ll but dedicated group of cognoscenti. First introducing the Manneken Pis - the iconic little boy whose stream of urine supplies water to this famous fountain and is also the logo for a Belgian beer company - the author takes the reader through a semi - scatological maze of cultural history. The earliest example is a fresco scene loc ated directly above Cimabue's Crucifixion from around 1280 at the Basilica of Saint Francis of Assisi, in which Lebensztejn's careful eye locates an angel behind a pillar urinating through a hole in his garment. He continues to navigate expertly through cu ltural twists and turns, stopping to discuss Pier Paolo Pasolini's 1968 film Teorema , for example, and Marlene Dumas's 1996 - 1997 homage to Rembrandt's pissing woman. At every moment, Lebensztejn's prose is lively, his thinking dynamic, and his subject matt er entertaining. In this short and poignant cultural history, readers will not only find the care for detail that has made Lebensztejn into one of the greatest European art historians, but also the rebelliousness that makes him one of the most interesting intellectuals of our time.

» Have you read this book? We'd like to know what you think about it - write a review about Pissing Figures book by Jean Claude Lebensztejn and you'll earn 50c in Boomerang Bucks loyalty dollars (you must be a Boomerang Books Account Holder - it's free to sign up and there are great benefits!)

Jean-Claude Lebensztejn is a French art historian, critic, and honorary professor of the University of Paris 1 PanthÃ¯Â¿Â½on-Sorbonne. His interests range from the art of the eighteenth and twentieth centuries, to film, music, human animality, and more generally, the question of frontiers and boundaries. In addition to his Ã¯Â¿Â½tudes cÃ¯Â¿Â½zanniennes (2006) and a scholarly edition of fifty of CÃ¯Â¿Â½zanne's letters (2011), Lebensztejn has recently published a collection of essays on nomads, a translation of Lao-tseu, a study of Pygmalion, a conversation with Malcolm Morley, and numerous texts concerned with questioning norms of taste and aesthetic values in general. He is preparing a book on transgression in the works of Franz Kafka, Marquis de Sade, and Comte de LautrÃ¯Â¿Â½amont. Jeff Nagy is a translator, critic, and historian of technology based in Palo Alto, California. His research focuses on networks pre- and post-Internet and the development of digital labor.

A Preview for this title is currently not available.
More Books By Jean Claude Lebensztejn
View All