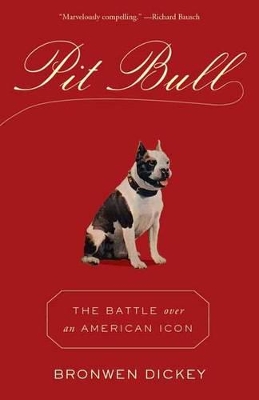 The hugely illuminating story of how a popular breed of dog became the most demonized and supposedly the most dangerous of dogs-and what role humans have played in the transformation.

When Bronwen Dickey brought her new dog home, she saw no traces of the infamous viciousness in her affectionate, timid pit bull. Which made her wonder- How had the breed-beloved by Teddy Roosevelt, Helen Keller, and Hollywood's "Little Rascals"-come to be known as a brutal fighter?

Her search for answers takes her from nineteenth-century New York City dogfighting pits-the cruelty of which drew the attention of the recently formed ASPCA-to early twentieth-century movie sets, where pit bulls cavorted with Fatty Arbuckle and Buster Keaton; from the battlefields of Gettysburg and the Marne, where pit bulls earned presidential recognition, to desolate urban neighborhoods where the dogs were loved, prized-and sometimes brutalized.

Whether through love or fear, hatred or devotion, humans are bound to the history of the pit bull. With unfailing thoughtfulness, compassion, and a firm grasp of scientific fact, Dickey offers us a clear-eyed portrait of this extraordinary breed, and an insightful view of Americans' relationship with their dogs.
From the Hardcover edition. » Have you read this book? We'd like to know what you think about it - write a review about Pit Bull book by Bronwen Dickey and you'll earn 50c in Boomerang Bucks loyalty dollars (you must be a Boomerang Books Account Holder - it's free to sign up and there are great benefits!)

BRONWEN DICKEYais an essayist and journalist who writes regularly for the Oxford American. Her work has also appeared inaThe New York Times,aSlate, The Best American Travel Writing 2009,aNewsweek,aandaOutside,aamong other publications. In 2009 she received a first-place Lowell Thomas Travel Journalism Award and a MacDowell Colony residency grant. She lives in North Carolina. From the Hardcover edition.

A Preview for this title is currently not available.
More Books By Bronwen Dickey
View All