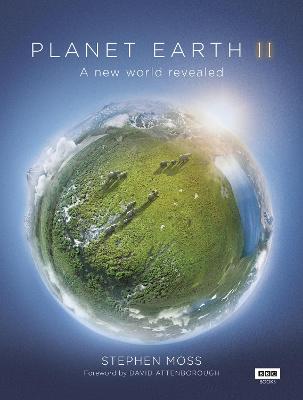 On the 10th anniversary of the BBC's genre-defining Planet Earth, this brilliant new book is an all-new look at our astonishing Planet Earth - from a completely new perspective.

10 years on from the first, groundbreaking, Planet Earth, we use the most incredible advances in technology and scientific discovery to bring you the most exciting and immersive picture of our world's wildlife yet.

With over 250 breathtaking photographs and stills from the BBC Natural History Unit's spectacular footage, this is an extraordinary new look at the complex life of some of the most amazing places on Planet Earth.

Each chapter reveals an environment - some never-before-seen, some astonishingly familiar - defined by a unique set of rules required for survival. From the most desolate desert to the depths of the jungle, from blistering heat and freezing cold to perpetual darkness and deadly UV, discover how a whole host of creatures have adapted to life in the most extreme conditions. And how they compete with one another to become the largest, the fastest, the most poisonous, or most devious - all in a bid to survive.

Planet Earth II includes the first in-depth look at the urban environment, and the surprising range of behaviours occurring right under our noses, as well as some previously untouched island worlds. Filmed with remarkable 5k and infra-red technology, these are the challenges, the confrontations, and the triumphs of some of the most extraordinary creatures in the natural world, told from their perspective.

This is our planet, as you have never seen it before.

» Have you read this book? We'd like to know what you think about it - write a review about Planet Earth II book by Stephen Moss and you'll earn 50c in Boomerang Bucks loyalty dollars (you must be a Boomerang Books Account Holder - it's free to sign up and there are great benefits!)

Stephen Moss is a naturalist, broadcaster, television producer and author. In a distinguished career at the BBC Natural History Unit his credits included Springwatch, Birds Britannia and The Nature of Britain. His books include A Bird in the Bush, A Sky Full of Starlings, The Bumper Book of Nature and Wild Hares and Hummingbirds. Originally from London, he now lives with his wife and children on the Somerset Levels.

A Preview for this title is currently not available.
More Books By Stephen Moss
View All

The Swallow: A Biography (Shortlisted for the Richard Jefferies Society and White Horse Bookshop Literary Award)
$49.42 $54.91