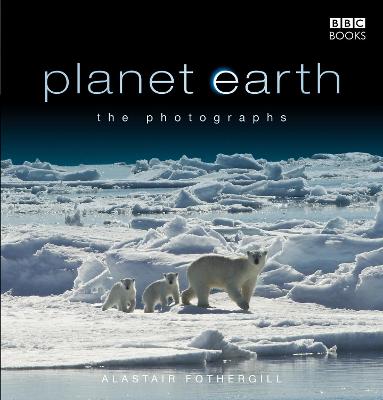 This book brings together a very special collection of pictures. PLANET EARTH is now regarded as the ultimate wildlife TV series, and its magic lies in its photography. Featuring the very best of PLANET EARTH images - from breathtaking aerials to unique, intimate portraits - PLANET EARTH, THE PHOTOGRAPHS is full of surprises, spectacle and a sense of awe. It is also, to quote David Attenborough, "an eloquent rallying call to all of us who care for the Earth's welfare to redouble our efforts to protect those wonders that still survive." Accompanying the images are thought-provoking captions by PLANET EARTH series producer Alastair Fothergill, along with quotes from the good and great of the wildlife and conservation world. Together they reveal the wonders of life on earth today and remind us that, without action, "within the next few years, the world itself may never look the same again.""There is something about the wonder of nature, nature in its infinite variety and mystery, that touches people in their very souls." Planet Earth - The Future

» Have you read this book? We'd like to know what you think about it - write a review about Planet Earth: The Photographs book by Alastair Fothergill and you'll earn 50c in Boomerang Bucks loyalty dollars (you must be a Boomerang Books Account Holder - it's free to sign up and there are great benefits!)

Alastair Fothergill studied zoology at the University of Durham and made his first film, on the Okavango, while still a student. Alastair joined the BBC Natural History Unit in 1983, working on The Really Wild Show, Wildlife on One and the series The Trials of Life. He was appointed head of the unit in 1992, and during his tenure he produced the award-winning series Life in the Freezer. In June 1998 he stood down to concentrate on his role as series producer of the hugely successful The Blue Planet. He has also presented several television programmes, including The Abyss, and is the author of four books, including Planet Earth- As You've Never Seen It Before.

Our Planet: The official companion to the ground-breaking Netflix original Attenborough series with a special foreword by David Attenborough
$39.99 $49.99