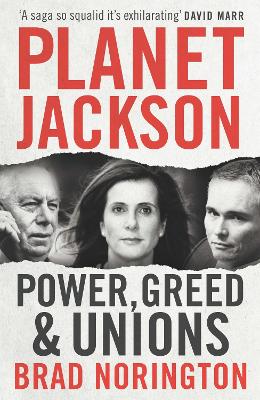 Kathy Jackson was hailed as a heroine for blowing the whistle on the million-dollar fraud of Michael Williamson, the corrupt boss of the Health Services Union (HSU). She endured bitter personal attacks from enemies in the Labor Party and the union movement.
But what if Jackson was just as corrupt as Williamson? Or worse?

While Jackson was being portrayed as a Joan of Arc figure, she was spending vast amounts of her own union members' money on international holidays,
fashion, jewellery, a mortgage, and even part of a divorce settlement.


Nothing, it seems, was off limits. This is the real HSU story-the staggering misuse of the union dues of some of the lowest paid workers in Australia. The HSU scandal is more than a dark morality tale marked by high drama
and farce. It exposes deep problems at the heart of the union movement and the Labor Party- tribalism, nepotism, a misplaced sense of entitlement and the misuse of other peoples' money.

» Have you read this book? We'd like to know what you think about it - write a review about Planet Jackson book by Brad Norington and you'll earn 50c in Boomerang Bucks loyalty dollars (you must be a Boomerang Books Account Holder - it's free to sign up and there are great benefits!)

Brad Norington has more than 30 years experience as a journalist writing for The Australian and The Sydney Morning Herald. As The Australian's chief reporter in Sydney, he tracked the real story behind disgraced corruption whistleblower Kathy Jackson and her partner Michael Lawler in a lengthy investigative series. He was The Australian's Washington correspondent during the first term of the Obama administration, has written extensively on politics and industrial relations, and is the author of several books.