A Plea For The Animals, A

Description - A Plea For The Animals, A by Matthieu Ricard

A powerful and wide-ranging indictment of the treatment of animals by humans-and an eloquent plea for animal rights.

The author comprehensively examines all areas of animal abuse as well their negative environmental effects, and he argues in favor of vegetarianism and its nutritional viability; but he equally targets the abhorrent aspects of experiments on animals by science and the many ways animals are reduced and abused as objects of amusement, from captivity in zoos to enslavement as pets. A section exposes the unimaginable abominations practiced as part of the international trade in exotic fauna and animal products (e.g., bear bile, rhinoceros horns, elephant tusks). And he devotes an entire chapter to the cruelties and absurdities of bullfighting. Matthieu's book differentiates itself from others in this field by being a complete and general indictment of the execrable treatment of animals by humans in our world today, of the moral bankruptcy that allows it, and its deleterious environmental effects.

Buy A Plea For The Animals, A by Matthieu Ricard from Australia's Online Independent Bookstore, Boomerang Books.

Other Editions - A Plea For The Animals, A by Matthieu Ricard 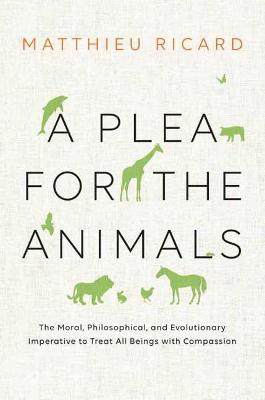 Book Reviews - A Plea For The Animals, A by Matthieu Ricard

» Have you read this book? We'd like to know what you think about it - write a review about Plea For The Animals, A book by Matthieu Ricard and you'll earn 50c in Boomerang Bucks loyalty dollars (you must be a Boomerang Books Account Holder - it's free to sign up and there are great benefits!)

MATTHIEU RICARD is a French Buddhist monk who resides at Shechen Tennyi Dargyeling Monastery in Nepal. Before becoming a monk he received a PhD in molecular genetics from the Louis Pasteur Institute. He is a renowned photographer and sought-after speaker, coauthor of The Monk and the Philosopher, and author of numerous other books, including the recent bestseller Altruism- The Power of Compassion to Change Yourself and the World and Happiness- A Guide to Developing Life's Most Important Skill, and he has been called the happiest person in the world.

A Preview for this title is currently not available.
More Books By Matthieu Ricard
View All

Our Animal Neighbors: Compassion for Every Furry, Slimy, Prickly Creature on Earth
$26.39 $32.99

Beyond the Self: Conversations between Buddhism and Neuroscience
$39.56 $43.96