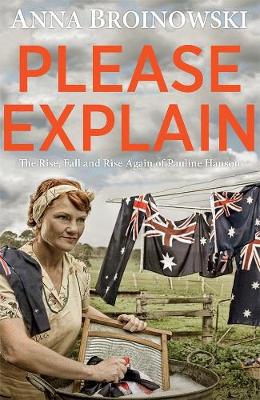 After eighteen years in the political wilderness, Pauline Hanson is back and more powerful than ever. Please Explain is a compelling, intimate look at how an Ipswich fish and chip shop lady changed the nation - and how she speaks directly to Australian society and our multicultural identity today.

In 1996, Pauline Hanson gave a speech that changed Australia. Targeting Asian and Indigenous people and foreign aid, Hanson unleashed a Pandora's box of division on the country. When she famously lost her federal seat in 1998, her political downfall seemed assured - but she stayed firmly in the spotlight, whether she was being locked up for electoral fraud or jiving on Dancing with the Stars. Now, after almost two decades in the political wilderness, Hanson is back in the Senate and more powerful than ever.

Before One Nation's astonishingly successful return to Australian politics in 2016, multi-award-winning filmmaker Anna Broinowski had complete access to Hanson and her 'Fed Up' election campaign. Broinowski followed Hanson as she flew from Rockhampton to Sydney to Great Keppel Island and beyond in her Jabiru two-seater. The absurdity, the discord and the hatred Hanson attracts and inflames were all on show - sometimes funny, sometimes frightening, and often surreal.

At the time, no one was taking Pauline Hanson and One Nation's political chances seriously, but Broinowski quickly realised that there was a movement forming. Pauline Hanson's explosive political journey mirrors Australia's own- from left-leaning multiculturalism, to the divided landscape we live in now. And, alongside the shocks of Brexit and Trump's presidency, Hanson's resurrection reflects a broader global trend towards outrageous far-right outsiders.

Please Explain is a compelling, intimate look at how an Ipswich fish and chip shop lady changed our nation - and how (whether we like it or not) she speaks directly to Australian society and our multicultural identity today.

» Have you read this book? We'd like to know what you think about it - write a review about Please Explain: The Rise, Fall and Rise Again of Pauline Hanson book by Anna Broinowski and you'll earn 50c in Boomerang Bucks loyalty dollars (you must be a Boomerang Books Account Holder - it's free to sign up and there are great benefits!)

Anna Broinowski is an author and filmmaker who has been tracking the illicit, subversive and bizarre since her 1995 film on the Japanese cultural underground, Hell Bento!! Her films include Aim High in Creation! (about the North Korean propaganda film industry), Forbidden Lie$ (about hoax author Norma Khouri), Helen's War (about anti-nuclear campaigner Dr Helen Caldicott), Sexing the Label (about queer Sydney in the 1990s) and Pauline Hanson- Please Explain!, which screened on SBS in 2016. They've won stuff, including three AACTAs, a Walkley, the Rome Festival Cult prize, Best Film at Silverdocs USA, a NSW Premier's Literary Award, the Writer's Guild of America Best Nonfiction Screenplay and a Russian Film Critics' prize shaped like an elephant. After covering Kim Jong Il in her first book, The Director is the Commander, and Senator Pauline Hanson in her second one, Please Explain, Anna is looking forward to not writing about politicians for a while.

A Preview for this title is currently not available.
More Books By Anna Broinowski
View All