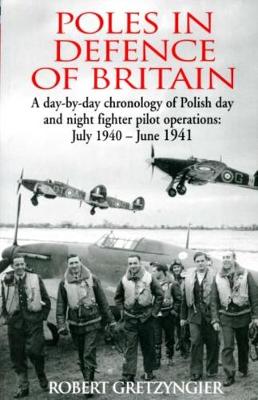 Poles in Defence of Britain

Description - Poles in Defence of Britain by Robert Gretzyngier

Fifteen years since it was originally published, Grub Street is proud to present the re-issue of 'Poles in Defence of Britain'. To the Polish volunteers who were to fly and fight so brilliantly and tenaciously throughout the Battle of Britain, the United Kingdom was known as 'Last Hope Island'. Many lost their lives, such as Antoni Ostowicz, many achieved glory and became aces such as Glowacki, Skalski and Witorzenc. The RAF came to depend on these men, with over 100 Polish pilots supporting almost thirty fighter squadrons, most especially 302, 303 and 307 (night fighter). The result of years of research, Robert Gretzyngier's book includes detailed combat descriptions, personal accounts from combat reports, memoirs, and diaries from the Polish, British and German perspective. There is in-depth biographical data of all Polish pilots, giving full RAF and PAF careers and much tabular material in appendix form. This book is a tremendous account of their contribution in those hectic days before the RAF began to take the offensive across the Channel. REVIEWS: "An exhaustive record of the heroic actions of the Polish pilots who escaped to Britain and helped ensure its survival." - Pennant "The result of many years of research, sharp and comprehensive, the text is supported by an excellent selection of rare photos." - Air Mail "There are detailed combat reports, much biographical data, 200 photographs and tabular material in appendix form. The bravery of these pilots and at times their reckless determination made them a force to be reckoned with. They inspire huge affection; this book does them proud and is an excellent commemoration of them." - Cross & Cockade International

Book Reviews - Poles in Defence of Britain by Robert Gretzyngier

» Have you read this book? We'd like to know what you think about it - write a review about Poles in Defence of Britain book by Robert Gretzyngier and you'll earn 50c in Boomerang Bucks loyalty dollars (you must be a Boomerang Books Account Holder - it's free to sign up and there are great benefits!)


A Preview for this title is currently not available.
More Books By Robert Gretzyngier
View All