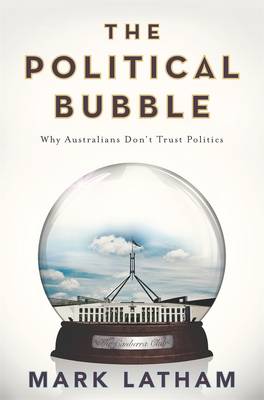 Australians once trusted the democratic process. While we got on with our lives, we assumed our politicians had our best interests at heart.

Not anymore. That trust has collapsed.

Mark Latham joined the Labor Party in the late 1970s hoping to improve people's lives through parliamentary service. Twenty-five years later, the Opposition Leader ended up as disillusioned as the rest of us. The scorching honesty of The Latham Diaries ensured he'd burned his political bridges, but ostracism from the Canberra Club has its advantages.

In The Political Bubble Mark Latham is free to explore how parliamentary democracy has lost touch with the people it's supposed to represent. As with most institutions at risk, politics has become more tribal, with left- and right-wing fanatics dominating formerly robust, mainstream parties.

After the disappointment of the Rudd/Gillard years, Tony Abbott promised to restore trust in Australian politics but, as with most of his promises, it was dispensable. The Political Bubble looks at the new government's policies - how Abbott is adding to distrust, not solving the problem.

What can be done about this democratic deficit? Can our parliamentary system realign itself with community expectations or has politics become one long race to the bottom?

'A brilliant analysis of Australia in the era of Tony Abbott and fanatical right-wing politics.' ROBERT MANNE

» Have you read this book? We'd like to know what you think about it - write a review about Political Bubble book by Mark Latham and you'll earn 50c in Boomerang Bucks loyalty dollars (you must be a Boomerang Books Account Holder - it's free to sign up and there are great benefits!)

Mark Latham was the Federal Member for Werriwa from 1994 to 2005, becoming Leader of the Labor Party in 2003. Prior to entering Federal Parliament, he spent seven years on Liverpool Council in south-west Sydney. He is the author of eight other books, including The Latham Diaries (2005) and Not Dead Yet (2013). Since leaving politics, Mark Latham has been a columnist for the Australian Financial Review and worked on radio and television as a political commentator. He lives in outer-south-west Sydney with his wife Janine and their three children.