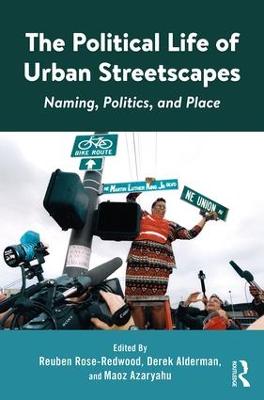 The Political Life of Urban Streetscapes

Description - The Political Life of Urban Streetscapes by Reuben Rose-Redwood

Streetscapes are part of the taken-for-granted spaces of everyday urban life, yet they are also contested arenas in which struggles over identity, memory, and place shape the social production of urban space. This book examines the role that street naming has played in the political life of urban streetscapes in both historical and contemporary cities. The renaming of streets and remaking of urban commemorative landscapes have long been key strategies that different political regimes have employed to legitimize spatial assertions of sovereign authority, ideological hegemony, and symbolic power. Over the past few decades, a rich body of critical scholarship has explored the politics of urban toponymy, and the present collection brings together the works of geographers, anthropologists, historians, linguists, planners, and political scientists to examine the power of street naming as an urban place-making practice. Covering a wide range of case studies from cities in Europe, North America, Sub-Saharan Africa, and Asia, the contributions to this volume illustrate how the naming of streets has been instrumental to the reshaping of urban spatial imaginaries and the cultural politics of place. » Have you read this book? We'd like to know what you think about it - write a review about Political Life of Urban Streetscapes book by Reuben Rose-Redwood and you'll earn 50c in Boomerang Bucks loyalty dollars (you must be a Boomerang Books Account Holder - it's free to sign up and there are great benefits!)

Reuben Rose-Redwood is an Associate Professor of Geography and Chair of the Committee for Urban Studies at the University of Victoria in British Columbia, Canada. His research focuses on the cultural politics of place naming, geographies of urban memory, and the spatial history of the geo-coded world. He is the co-editor of Performativity, Politics, and the Production of Social Space (2014) and has published in a broad range of scholarly journals, including Progress in Human Geography, Social & Cultural Geography, Urban History, and the Annals of the Association of American Geographers. His work on the historical geography of New York's urban streetscape has also been featured in various popular media outlets, such as the Discovery Channel, the History Channel, and the New York Times. Derek Alderman is a Professor in the Department of Geography at the University of Tennessee, USA. His research interests and published work focus on the role of place and street naming in the context of African American identity politics and civil rights struggles in the southeastern United States. He is co-author of Civil Rights Memorials and the Geography of Memory (2008) and is perhaps best known for advancing scholarly and public understanding of the politics of naming streets after Martin Luther King, Jr. He is also frequently sought after by the news media to comment on this and other cultural issues Maoz Azaryahu is a Professor of Cultural Geography at the University of Haifa, Israel. His research focuses on urban and landscape semiotics as well as the cultural and historical geographies of national myths and public memory in Israel and Germany, landscapes of popular culture, the politics of street naming, and the cultural history of places and landscapes. He is the author of numerous books and articles, including Von Wilhelmplatz zu Thalmannplatz: Politische Symbole im OEffentlicehn Leben der DDR (1991), State Cults: Celebrating Independence and Commemorating the Fallen in Israel 1948-1956 (1995, in Hebrew), Tel Aviv: Mythography of a City (2006), and Namesakes: History and Politics of Street Naming in Israel (2012, in Hebrew).