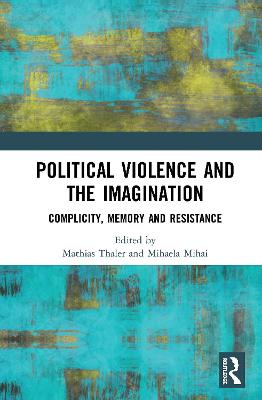 Political Violence and the Imagination: Complicity, Memory and Resistance

Description - Political Violence and the Imagination: Complicity, Memory and Resistance by Mathias Thaler

Using a variety of theoretical reflections and empirically grounded case studies, this book examines how certain kinds of imagination - political, artistic, historical, philosophical - help us tackle the challenge of comprehending and responding to various forms of political violence.

Understanding political violence is a complex task, which involves a variety of operations, from examining the social macro-structures within which actors engage in violence, to investigating the motives and drives of individual perpetrators. This book focuses on the faculty of imagination and its role in facilitating our normative and critical engagement with political violence. It interrogates how the imagination can help us deal with past as well as ongoing instances of political violence. Several questions, which have thus far received too little attention from political theorists, motivate this project: Can certain forms of imagination - artistic, historical, philosophical - help us tackle the challenge of comprehending and responding to unprecedented forms of violence? What is the ethical and political value of artworks depicting human rights violations in the aftermath of conflicts? What about the use of thought experiments in justifying policy measures with regard to violence? What forms of political imagination can foster solidarity and catalyse political action?

This book opens up a forum for an inclusive and reflexive debate on the role that the imagination can play in unpacking complex issues of political violence.

The chapters in this book were originally published in a special issue of the journal, Critical Review of International Social and Political Philosophy.

» Have you read this book? We'd like to know what you think about it - write a review about Political Violence and the Imagination: Complicity, Memory and Resistance book by Mathias Thaler and you'll earn 50c in Boomerang Bucks loyalty dollars (you must be a Boomerang Books Account Holder - it's free to sign up and there are great benefits!)


A Preview for this title is currently not available.
More Books By Mathias Thaler
View All