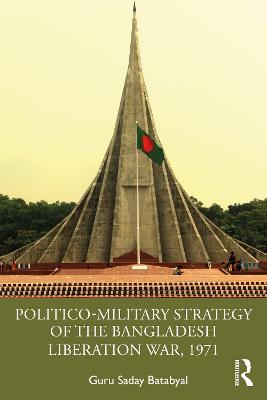 This book critically examines the politico-military strategy of India, Pakistan, and Bangladesh during the Bangladesh Liberation War of 1971. What began as a power struggle and cultural conflict between West and East Pakistan, later compelled India to intervene-an intervention that decisively shaped and influenced the geo-politics of the region and the global order.

This volume is a systematic study of the situation of events, operational art and tactics, cold war politics, international reactions, and their impact on the formulation of the national grand strategy of all three nations. The book discusses various key themes such as the creation of Pakistan and events leading to its secession, the military geography of East Pakistan, state of armed forces of India and Pakistan and India's humanitarian intervention, the role of Mukti Bahini, and the ambiguous stance of the United Nations in the war. The book offers an appraisal of the performances of the opposing forces and reflects on the inevitability of war and its outcome. It also gives an overview of the state formation of the three nations, encompassing the defining moments of the modern history of these South Asian countries and highlighting the socio-economic progress they have made half a century after the liberation war.

A compelling treatise in the history of politico-military strategy, this book will be of interest to scholars and researchers of politics and international relations, partition studies, modern history, military history, South Asian studies, international security, defence and strategic studies, language politics, Islamic history, and refugee and diaspora studies. It will also appeal to general readers interested in the histories of Bangladesh, Pakistan, and India.

» Have you read this book? We'd like to know what you think about it - write a review about Politico-Military Strategy of the Bangladesh Liberation War, 1971 book by Guru Saday Batabyal and you'll earn 50c in Boomerang Bucks loyalty dollars (you must be a Boomerang Books Account Holder - it's free to sign up and there are great benefits!)