Despite the staggering number of books related to the Northern Ireland political arena, most of the literature concentrates on only a few dimensions of the conflict" and especially on constitutional policy and the on-going search for a resolution of the antagonisms. This original textbook, the first of its kind, serves as a comprehensive examination of the subject by exploring these topics and other important dimensions of politics which have been overlooked and undervalued. Politics in Northern Ireland is written by a team of distinguished academics, drawn from both within and outside Northern Ireland. It adopts the analytic tools of political science and brings a comparative perspective to bear on the politics of Northern Ireland. Early chapters examine the historic sources of conflict, analyse the period since the outbreak of the modern troubles, and discuss the differences between the communities. The book then examines the nature of parties, elections, and elective assemblies, before focusing on policy matters, such as fair employment, policing, and gender. In the concluding chapter, contributors consider relations with the Republic of Ireland and discuss events as current as today's headlines, including the historic breakthrough in negotiations, the referendums, and the Assembly elections. The result is a well-rounded core text designed for the classroom, as well as for those interested in learning more about different facets of politics in Northern Ireland.

Other Editions - Politics In Northern Ireland by Paul Mitchell 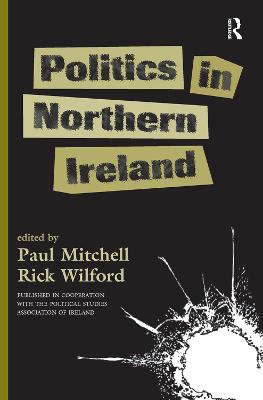 » Have you read this book? We'd like to know what you think about it - write a review about Politics In Northern Ireland book by Paul Mitchell and you'll earn 50c in Boomerang Bucks loyalty dollars (you must be a Boomerang Books Account Holder - it's free to sign up and there are great benefits!)

Michael Marsh is Head of the Department of Political Science and a Fellow of Trinity College, Dublin. He is the author of a wide variety of articles on parties and electoral behaviour which have appeared in books and journals published in Europe and the United States. His co-edited books include Candidate Selection in Comparative Perspective: The Secret Garden of Politics (London, 1988) and Modern Irish Democracy (Dublin, 1993). Paul Mitchell is a lecturer in politics at the Queen's University, Belfast. He has published a range of articles and chapters on coalition politics and party competition as well as conflict regulation in ethnically divided societies. A book he co-edited (with Rick Wilford), Politics in Northern Ireland, was recently published by Westview Press. Paul Mitchell is lecturer in politics at the Queen's University, Belfast. The author of a wide range of articles and chapters in the fields of political competition in parliamentary democracies and competition and conflict regulation in ethnically divided societies, he is currently coediting the forthcoming How Ireland Voted 1997. Rick Wilford is reader in politics at Queen's University, Belfast. His most recent books include the jointly authored Women and Political Participation in Northern Ireland (1996) and the coedited Women, Ethnicity, and Nationalism: The Politics of Transition (1998). He is also the joint contributing editor of the forthcoming book, Contesting Politics: Women in Ireland, North and South.

A Preview for this title is currently not available.
More Books By Paul Mitchell
View All

Your Leadership Diamond: Transform Your Life, Lead Your People and Leave a Legacy
$21.24 $24.99

Impact of Institutions and Professions on Legal Development
$58.46 $64.95