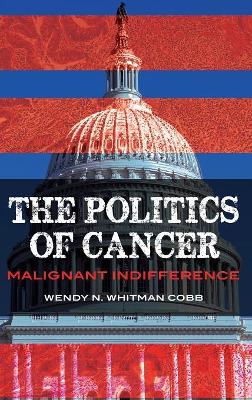 The Politics of Cancer

Description - The Politics of Cancer by Wendy N. Whitman Cobb

This book examines the politics of cancer, explains how our government is intrinsically tied to cancer research efforts, and documents how major political actors make cancer policy and are influenced in their decision making by political, social, scientific, and economic variables.

Is whether we contract cancer-and whether we survive the disease, if we get it-largely just a result of good versus bad luck, or are these outcomes regarding cancer tied to the policies and actions of our federal government? Cancer-treating drug development and approval is overseen by the U.S. Food and Drug Administration, billions of dollars of federal money are devoted towards cancer research, and exposure of citizens to potentially cancer-causing environments or chemicals is regulated by the Environmental Protection Agency. Additionally, all of these factors can be affected by the political motivations of our most powerful politicians.

The Politics of Cancer: Malignant Indifference analyzes the policy environment of cancer in America: the actors, the political institutions, the money, and the disease itself, identifying how haphazard U.S. government policy toward cancer research has been and how the president, Congress, government bureaucracies, and even the cancer industry have failed to meet timelines and make the expected discoveries. Whitman Cobb examines funding for the National Cancer Institute and the roles of the executive, Congress, policy entrepreneurs, and the bureaucracy as well as that of the state of cancer science. She argues that despite the so-called "war on cancer," no strategic, comprehensive government policy has been imposed-leading to an indecisive cancer policy that has significantly impeded cancer research.

Written from a political science perspective, the book enables readers to gain insight into the realities of science policy and the ways in which the federal government is both the source of funding for much of cancer research and often deficient in setting comprehensive and consistent anti-cancer policy. Readers will also come to understand how Congress, the president, the bureaucracy, and the cancer industry all share responsibility for the current state of cancer policy confusion and consider whether pharmaceutical companies, for-profit cancer treatment hospitals, and interest groups like the American Cancer Society have a personal incentive to keep the fight alive.

» Have you read this book? We'd like to know what you think about it - write a review about Politics of Cancer book by Wendy N. Whitman Cobb and you'll earn 50c in Boomerang Bucks loyalty dollars (you must be a Boomerang Books Account Holder - it's free to sign up and there are great benefits!)

A Preview for this title is currently not available.
More Books By Wendy N. Whitman Cobb
View All