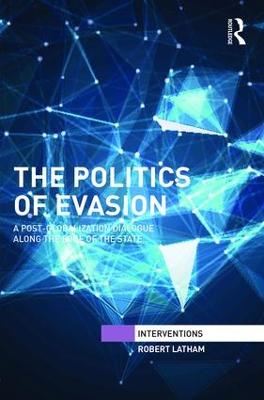 The Politics of Evasion

A Post-Globalization Dialogue Along the Edge of the State

Description - The Politics of Evasion by Robert Latham

Burgeoning national security programs; thickening borders; Wikileaks and Anonymous; immigrant rights rallies; Occupy movements; student protests; neoliberal austerity; global financial crises - these developments underscore that the fable of a hope-filled post-cold war globalization has faded away. In its place looms the prospect of states and corporations transforming a permanent war on terror into a permanent war on society. How, at the critical juncture of a post-globalization era, will policymakers and power-holders in leading states and corporations of the Global North choose to pursue power and control? What possibilities and limits do activists and communities face for progressive political action to counter this power inside and outside the state?

This book is a sustained dialogue between author and political theorist, Robert Latham and Mr. V, a policy analyst from a state in the Global North. Mr. V is sympathetic to the pursuit of justice, rights and freedom by activists and movements but also mindful of the challenges of states in pursuing security and order in the current social and political moment. He seeks a return to the progressive, welfare-oriented state associated with the twentieth century. The dialogue offers an in-depth consideration of whether this is possible and how a progressive politics might require a different approach to social organization, power and collective life.

Exploring key ideas, such as sovereignty, activism, neoliberalism, anarchism, migration, intervention, citizenship, security, political resistance and transformation, and justice, this book will be of interest to academics and students of Political Science, Sociology, Anthropology, Law, Geography, Media and Communication, and Cultural Studies.

Book Reviews - The Politics of Evasion by Robert Latham

» Have you read this book? We'd like to know what you think about it - write a review about Politics of Evasion book by Robert Latham and you'll earn 50c in Boomerang Bucks loyalty dollars (you must be a Boomerang Books Account Holder - it's free to sign up and there are great benefits!)

A Preview for this title is currently not available.
More Books By Robert Latham
View All

The Radical Left and Social Transformation: Strategies of Augmentation and Reorganization
$249.48 $252.00

The Liberal Moment: Modernity, Security, and the Making of Postwar International Order
$55.76 $61.95

Three Years of Democracy. Shall We Have Peace or War? an Address Delivered Before the Democracy of New Hampshire on the Occasion of Their Annual Banquet Held in the City of Concord, N.H., on March 16, 1916; Volume 1
$65.27 $72.52

Two Dissertations on the Hamlet of Saxo Grammaticus and of Shakespear
$43.08 $47.87