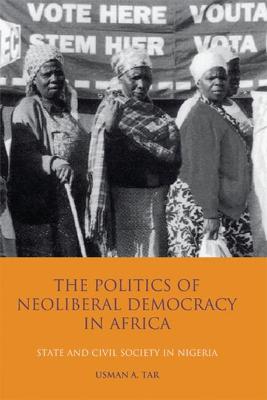 The Politics of Neoliberal Democracy in Africa

State and Civil Society in Nigeria

Description - The Politics of Neoliberal Democracy in Africa by Usman A. Tar

Since the late 1980s the changing dynamic of global development has driven the tide of democratic expansion in the developing world. In Africa, western donors have sought to impose 'neo-liberal' visions of socio-economic and political institution-building, spreading political reforms and economic liberalisation with far-reaching consequences. Associated with external interventions, but also sometimes conflicting with them, are internal protests against authoritarianism, which have problematically reinforced and/or undermined the donor agenda for democratic reform.Here, Usman Tar questions the assumption that Africa was lacking the essential components for a spontaneous transition to democracy. He explores the dynamic, but contradictory, links between external and internal dimensions of neo-liberal democratic expansion in Africa, focusing on Nigeria. Tar dissects the struggles for democracy, and for democratic policy and practice in a country with rich economic potential but a troubled political dispensation.

Buy The Politics of Neoliberal Democracy in Africa by Usman A. Tar from Australia's Online Independent Bookstore, Boomerang Books.

Book Reviews - The Politics of Neoliberal Democracy in Africa by Usman A. Tar

» Have you read this book? We'd like to know what you think about it - write a review about Politics of Neoliberal Democracy in Africa book by Usman A. Tar and you'll earn 50c in Boomerang Bucks loyalty dollars (you must be a Boomerang Books Account Holder - it's free to sign up and there are great benefits!)

Usman A. Tar received a PhD in Peace and Conflict Studies with distinction from the Department of Peace Studies, University of Bradford. He also received M.Sc. in International Relations (distinction) and B.Sc. in Political Science (first class) from the University of Maiduguri, Nigeria. He holds a Lectureship position at the University of Maiduguri (on leave). He has held teaching and research positions at the Africa Centre/Department of Peace Studies, University of Bradford, and participated in a number of international conferences and workshops. He is a member of the Editorial Boards of the Review of African Political Economy (Sheffield); Information and Democracy (London Metropolitan University) and has previously served as contributing editor to Peace, Conflict and Development (University of Bradford). He has published in peer review journals and contributed chapters in edited books. His research interests include International Relations - theory & practice; Politics of Development; Peace, Conflict and Security; Governance and Democracy; State, Civil Society & Citizenship.

A Preview for this title is currently not available.
More Books By Usman A. Tar
View All

Routledge Handbook of Counterterrorism and Counterinsurgency in Africa
$395.01 $399.00