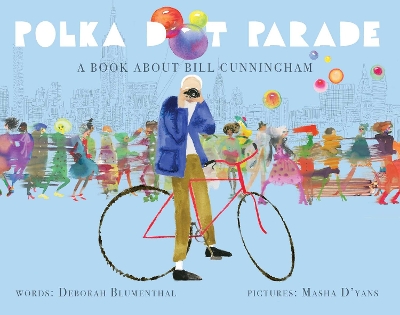 A Book about Bill Cunningham

"Beautifully rendered and told, the book brings to life the work of a gifted 20th-century artist whose creative vision will always be in vogue." Kirkus Reviews, Starred review

in the drape of an evening dress,

in the swoosh of a knife-pleated skirt,

Every day, Bill Cunningham pedaled his bike through New York City searching for beauty. As he took picture after picture, Bill found beauty not in people, but in their clothes. Drawn to bold and creative choices, Bill's photos captured the attention of the New York Times. He traveled to Paris for Fashion Week, and admiration for his work grew. With his sense of creativity and daringness, his own personal style of photography came to be known as street art photography.

His photos left a lasting impression on all those who came across his work and they continue to inspire creativity today. This is the story of the legend who created street fashion photography and left behind a legacy of glorious pictures. Bill Cunningham used his passion and talent to capture the beauty he saw in fashion and the ultimate freedom that it represents to each and every person.

This is an inspiring picture book about finding your path and being creative.

» Have you read this book? We'd like to know what you think about it - write a review about Polka Dot Parade book by Deborah Blumenthal and you'll earn 50c in Boomerang Bucks loyalty dollars (you must be a Boomerang Books Account Holder - it's free to sign up and there are great benefits!)

Deborah Blumenthal is an award-winning journalist and nutritionist who now divides her time between writing children's books and adult novels. She has been a regular contributor to the New York Times (including four years as the Sunday New York Times magazine beauty columnist), and a home design columnist for Long Island Newsday. Her health, fitness, beauty, travel, and feature stories have appeared in many other newspapers and national magazines including New York's Daily News, the Washington Post, the Los Angeles Times, Harper's Bazaar, Cosmopolitan, Woman's Day, Family Circle, Self, and Vogue. Blumenthal lives in New York City. You can visit her online at deborahblumenthal.com. Masha D'yans is an author, artist, and illustrator. Originally from Russia, Masha came to America when she was 13 years old. She attended St. Petersburg State Academy Art Lyceum and Cooper Union, from which she holds a BFA. In 2002, she started a greeting card line to feature her watercolor works. Inspired by nature, fairy tales, Japan, and her refusal to grow up, these cards quickly caught the attention of Barneys New York and Louis Boston. Today, her cards, products, and picture books are found in shops around the world. She lives in Los Angeles, California. You can visit her online at masha.com.

A Preview for this title is currently not available.
More Books By Deborah Blumenthal
View All