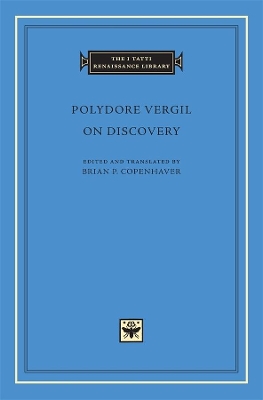 The Italian humanist Polydore Vergil (1470-1555) was born in Urbino but spent most of his life in early Tudor England. His most popular work, On Discovery (De inventoribus rerum, 1499), was the first comprehensive account of discoveries and inventions written since antiquity. Thirty Latin editions of this work were published in Polydore's lifetime, and by the eighteenth century more than a hundred editions had appeared in eight languages, including Russian. On Discovery became a key reference for anyone who wanted to know about "firsts" in theology, philosophy, science, technology, literature, language, law, material culture, and other fields. Polydore took his information from dozens of Greek, Roman, biblical, and Patristic authorities. His main point was to show that many Greek and Roman claims for discovery were false and that ancient Jews or other Asian peoples had priority. This is the first English translation of a critical edition based on the Latin texts published in Polydore Vergil's lifetime.

» Have you read this book? We'd like to know what you think about it - write a review about Polydore Vergil on Discovery book by Polydore Vergil and you'll earn 50c in Boomerang Bucks loyalty dollars (you must be a Boomerang Books Account Holder - it's free to sign up and there are great benefits!)

Brian P. Copenhaver is Professor of History and Philosophy and Provost at UCLA. He is the coauthor of Renaissance Philosophy and editor and translator of Hermetica.

A Preview for this title is currently not available.
More Books By Polydore Vergil
View All

Three Books of Polydore Vergil's English History, Comprising the Reigns of Henry VI., Edward IV., and Richard III. from an Early Translation, Preserved Among the Mss. of the Old Royal Library in the British Museum
$85.08 $94.53

A Pleasant and Compendious History of the First Inventers and Instituters of the Most Famous Arts, Misteries, Laws, Customs and Manners in the Whole World. Together with Many Other Rarities and Remarkable Things Rarely Known
$47.04 $52.27