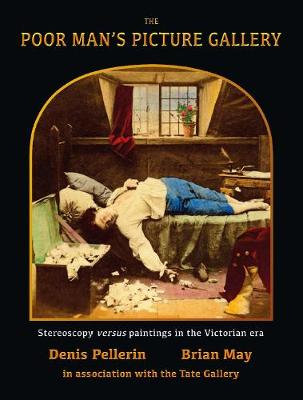 Stereoscopy versus Paintings in the Victorian Era

Description - The Poor Man's Picture Gallery by Brian May

"Exploring for the very first time the hidden relationship between paintings and stereoscopic cards in Victorian times." The advent of a new painting by a great artist was big news in the 1850s, but few were able to access and enjoy directly the new works of art. Stereo cards, created by enterprising photographers of the day, reconstructed the scenes and gave an opportunity for the man in the street to enjoy these scenes, in magical life-like 3D. The Poor Man's Picture Gallery contains high-definition printed reproductions of well-known Victorian paintings in the Tate Gallery, and compares them with related stereo cards - photographs of scenes featuring real actors and models, staged to tell the same story as the corresponding paintings, all of which are the subject of an exhibition in the Tate Gallery in 2014.

Book Reviews - The Poor Man's Picture Gallery by Brian May

» Have you read this book? We'd like to know what you think about it - write a review about Poor Man's Picture Gallery book by Brian May and you'll earn 50c in Boomerang Bucks loyalty dollars (you must be a Boomerang Books Account Holder - it's free to sign up and there are great benefits!)

Although best known to the world as the lead guitarist of supergroup Queen, Brian May has a PhD in astrophysics and has long been a collector of 3D photography. He wrote A Village Lost and Found with Elena Vidal in 2009, and Diableries in 2013. Denis Pellerin was bitten by the stereo bug in the 1980s. He graduated as an MA in Art History at the Sorbonne in 1999 and has since been specialising in French and British Victorian genre stereoviews. He curates Brian's extensive stereo collection and is also currently working on his Phd.

A Preview for this title is currently not available.
More Books By Brian May
View All