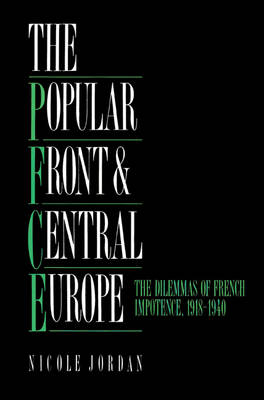 The Popular Front and Central Europe

Description - The Popular Front and Central Europe by Nicole Jordan

Between 1936 and 1938, the French alliance system in East Central Europe collapsed. The resulting dramatic expansion of German power led directly to the Second World War. This illuminating study investigates the implications of French military, economic and diplomatic policies in Central Europe from Versailles until the fall of France, establishing the proper context for the policy options of Leon Blum's Popular Front. It focuses on the clash between the French military and French radical politics in 1936-7 when Blum's government sought to rally to the defence of Czechoslovakia. The figure of Blum illustrates the insights and the dilemmas of a democratic Socialist caught up in the imbrication of foreign and domestic politics which increasingly characterised the 1930s.

» Have you read this book? We'd like to know what you think about it - write a review about Popular Front and Central Europe book by Nicole Jordan and you'll earn 50c in Boomerang Bucks loyalty dollars (you must be a Boomerang Books Account Holder - it's free to sign up and there are great benefits!)


A Preview for this title is currently not available.
More Books By Nicole Jordan
View All