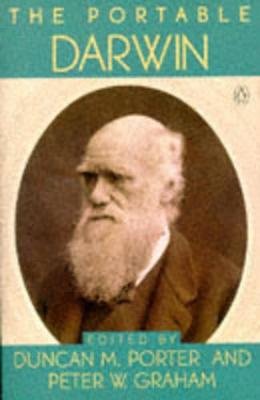 "Deserves to be as widely read as were the originals when they were first published." Biological Journal of the Linneas Society. Includes five chapters from The Origin of Speices,complete and unabridged; significant extracts from the works that precede and develop the theory of evolution- The Voyage of the Beagle, The Descent of Man, and The Variations of Animals and Plants; scientific papers, travel writings, letters, and a family memorial; plus a chronology and biography.

» Have you read this book? We'd like to know what you think about it - write a review about Portable Darwin book by Charles Darwin and you'll earn 50c in Boomerang Bucks loyalty dollars (you must be a Boomerang Books Account Holder - it's free to sign up and there are great benefits!)

Charles Darwin, a Victorian scientist and naturalist, has become one of the most famous figures of science to date. Born in 1809 to an upper-middle-class medical family, he was destined for a career in either medicine or the Anglican Church. However, he never completed his medical education and his future changed entirely in 1831 when he joined HMS Beagle as a self-financing, independent naturalist. On returning to England in 1836 he began to write up his theories and observations which culminated in a series of books, most famously On the Origin of Species by Means of Natural Selection in 1859, where he challenged and contradicted contemporary biological and religious beliefs with two decades worth of scientific investigation and theory. Darwin's theory of natural selection is now the most widely accepted scientific model of how species evolve. He died in 1882 and was buried in Westminster Abbey.