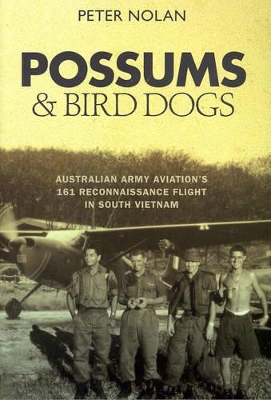 Captain Bevan Smith's inadvertent broadcast alerted the troops on the ground that a Viet Cong ambush had been triggered. The knuckles had been shot out of his left hand. Somehow he got the Sioux chopper and battalion commander Lieutenant Colonel Alec Preece down safely, but his war in Vietnam was over.

The story of Australian Army Aviation in South Vietnam begs to be told. The fledgling 161 Recce Flight deployed to Bien Hoa in 1965 and its Possum callsign was heard in the crowded skies until Australian operations ceased in 1972. The Flight's pilots flew more than 87,000 sorties to provide intelligence on enemy movements and locations as well as direct operational and administrative support for all task force operations. Three pilots were killed in action. Others were decorated for acts of quiet courage. Support and maintenance staff worked day and night to sustain the massive flying effort required.

Author Peter Nolan has drawn on official histories and the Flight's records, supplemented by oral histories from its past members, to present a vivid account of the challenges faced and overcome by a small group of Australians at war. Written for all aviation enthusiasts, it is a timeless story of dedication, humour and courage under fire.

» Have you read this book? We'd like to know what you think about it - write a review about Possums and Bird Dogs book by Peter Nolan and you'll earn 50c in Boomerang Bucks loyalty dollars (you must be a Boomerang Books Account Holder - it's free to sign up and there are great benefits!)

Peter Nolan served with 161 Recce Flights in Vietnam from February 1967 to February 1968 as one of a small number of RAAF technicians. His tour encompassed significant periods, including the move of the Flight to its final location at Nui Dat, the intensification of operations during 1967 and the 1968 Tet Offensive. Peter's military service spanned 25 years and he is now retired and living in Queensland.

A Preview for this title is currently not available.
More Books By Peter Nolan
View All

The Political Economy Of Collective Farms: An Analysis Of China's Postmao Rural Reforms
No Stock on Hand, Supplier Has No Due Date for Supply.
$226.80 $252.00