Power in a Changing World Economy

This book is about power in a changing world economy. Though power is ubiquitous in the study of International Political Economy, the concept is underdeveloped in formal theoretical terms. This collection of essays analyses recent experience in East Asia to advance our theoretic understanding of state power in IPE. Over the last quarter century, no other region of the world has had a greater impact on the global distribution of economic resources and capabilities. China, with its "peaceful rise," now stands as the second largest national economy on the face of the earth; South Korea and Taiwan have become industrial powerhouses; Hong Kong and Singapore are among the world's most important financial centres; and new poles of growth have emerged in several southeast Asian countries - all while Japan, long the region's dominant market, has slipped into seemingly irreversible decline. The volume's nine essays, contributed by leading scholars in the United States, Britain and Taiwan, aim to extract relevant inferences and insights from these developments for the study of state power. All are framed by a core agenda encompassing four key clusters of questions concerning the meaning, sources, uses, and limits of power. These essays ask: What new lessons are offered for power analysis in International Political Economy?

Other Editions - Power in a Changing World Economy by Benjamin J. Cohen 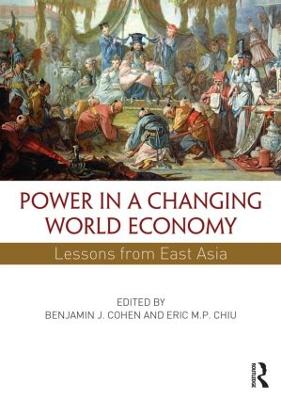 » Have you read this book? We'd like to know what you think about it - write a review about Power in a Changing World Economy book by Benjamin J. Cohen and you'll earn 50c in Boomerang Bucks loyalty dollars (you must be a Boomerang Books Account Holder - it's free to sign up and there are great benefits!)

Benjamin J. Cohen is Louis G. Lancaster Professor of International Political Economy at the University of California, Santa Barbara. A specialist in the political economy of international money and finance, he is the author of thirteen books, including the geography of money (1998), the future of money (2004), and the future of global currency (2011). Eric M.P. Chiu is an Associate Professor and Director at the Graduate Institute of National Policy and Public Affairs at the National Chung Hsing University in Taiwan. His research interests include international political economy and international money and finance, with specific focus on both emerging and developing countries.