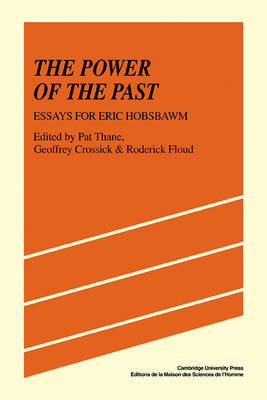 The Power of the Past

Description - The Power of the Past by Pat Thane

Modern industrial societies are the creation of forced of change embedded in their pre-industrial and pre-capitalist past, forces which have shaped their economic structures, their politics of domination and resistance, their social ideas and relationships. In this book a distinguished group of historians focuses on this dialectal relationship between capitalism and its pre-capitalist heritage, revealing the ways in which older forms - whether they be social and economic structures and institutions, movements or ideologies, rituals or vocabulary - help to shape new, and are themselves reshaped in the process. The book thus develops a central theme in the writing of Eric Hobsbawm, to whom these essays are presented as a tribute on his retirement from Birkbeck College. An additional essay provides a major reappraisal of Hobsbawm's work. A number of different themes in modern European history are discussed in the context of the interrelationship of capitalism and the pre capitalist past. Several essays explore the history of the working class, its ideas and strategies of resistance, in France, Britain, Germany and Spain. Others discuss the place of landowners and bankers in the European ruling classes, and the development of central and eastern European societies. Their common concern is with the power of the past over patterns of change, and as such they are both a tribute to an outstanding British historian and a major contribution to the analysis of modern European history.

Buy The Power of the Past by Pat Thane from Australia's Online Independent Bookstore, Boomerang Books.

Book Reviews - The Power of the Past by Pat Thane

» Have you read this book? We'd like to know what you think about it - write a review about Power of the Past book by Pat Thane and you'll earn 50c in Boomerang Bucks loyalty dollars (you must be a Boomerang Books Account Holder - it's free to sign up and there are great benefits!)


A Preview for this title is currently not available.
More Books By Pat Thane
View All