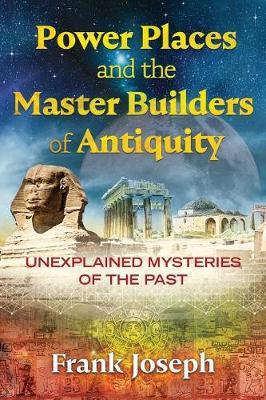 Power Places and the Master Builders of Antiquity

Unexplained Mysteries of the Past

Sharing his personal investigations into a wide range of ancient mysteries and paranormal enigmas in America and abroad, Frank Joseph takes us on a journey into the high strangeness of our world.

Beginning with the work of the master builders of antiquity, the author examines Old World connections with New World sacred centers, such as the similarities between Ohio's Mound City and the pyramids and tombs of the Giza Plateau, as well as ancient American cities of the Sun, China's Great Pyramid, and the possibility of a Templar treasure on Oak Island. He explores modern sacred sites, such as Iowa's Grotto of Gems, Tennessee's Greek Temple of the goddess Athena, and Florida's Coral Castle. He investigates pre-Columbian sites and underwater pyramids in the Midwest, Wisconsin's UFO hot-spot, lost Aztec Cities of Gold in Kansas, and giant-built constructions in Illinois. He details how the intriguing acoustics of Newgrange in Ireland are echoed in its spiral carvings. Exploring spiritual uses of altered states, he looks at the practices of Minoan snake handlers, Mayan shamans, and prophets through the ages.

Providing his own investigations into classic paranormal phenomena and ancient mysteries, the author also examines evidence of the Bermuda Triangle, Atlantis, and the Ark of the Covenant. He explores the forgotten or suppressed work of some of history's most extraordinary personalities, including Jules Verne, Sir Francis Bacon, Mother Shipton, and the real-life inspiration for Indiana Jones, Count Byron de Prorok. He investigates wonders of our natural world, including communication with elemental beings, the numinous secrets of water, and the living soul of matter.

Frank Joseph investigates these phenomena not to explain them away, but to expose their power to affect and elevate human consciousness.

» Have you read this book? We'd like to know what you think about it - write a review about Power Places and the Master Builders of Antiquity book by Frank Joseph and you'll earn 50c in Boomerang Bucks loyalty dollars (you must be a Boomerang Books Account Holder - it's free to sign up and there are great benefits!)

Frank Joseph was the editor in chief of Ancient American magazine from 1993 until 2007. He is the author of several books, including Before Atlantis and Advanced Civilizations of Prehistoric America. He lives in the Upper Mississippi Valley.