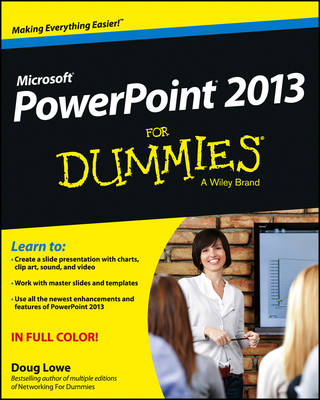 Get up and running with this full-color guide to PowerPoint
2013!
PowerPoint, the number one presentation software, has been
revised and improved with the introduction of Microsoft Office
2013. With this all-new, full-color book by your side, you will
learn how to take full advantage of all of PowerPoint's powerful
and dynamic capabilities. Bestselling veteran For Dummies,
author Doug Lowe breaks it all down so that you can create a
powerful and effective slideshow presentation with the new
wide-screen theme and variant that incorporates videos, pictures,
and shapes, and allows you to create customized icons using
powerful tools.

Shows you how to create presentations with pizzazz using the
new collection of themes, and then helps you align shapes, text
boxes, and graphics

Zeroes in on all of PowerPoint's updated features, such as
zooming in and out smoothly, switch slides easily (in or out of
sequence), and projecting to a second screen

Explains how to Place and track comments next to the text
you're discussing so everyone can see who replied to whom, and
when

Highlights ways to work with hyperlinks, create web pages with
PowerPoint, video edit, and much more

PowerPoint 2013 For Dummies points you to the power of
this updated application so that you can create effective and
impressive presentations.

» Have you read this book? We'd like to know what you think about it - write a review about PowerPoint 2013 for Dummies book by Doug Lowe and you'll earn 50c in Boomerang Bucks loyalty dollars (you must be a Boomerang Books Account Holder - it's free to sign up and there are great benefits!)

Doug Lowe is the bestselling author of more than 40 For Dummies books. He's covered everything from Microsoft Office to creating web pages to technologies such as Java and ASP.NET, and has written several editions of both PowerPoint For Dummies and Networking For Dummies.

A Preview for this title is currently not available.
More Books By Doug Lowe
View All