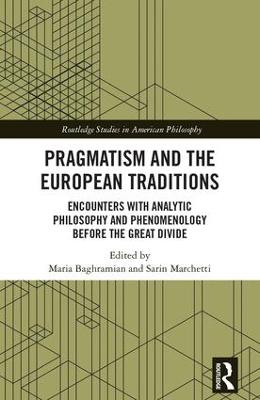 Pragmatism and the European Traditions

Encounters with Analytic Philosophy and Phenomenology before the Great Divide

Description - Pragmatism and the European Traditions by Maria Baghramian

The turn of the twentieth century witnessed the birth of two distinct philosophical schools in Europe: analytic philosophy and phenomenology. The history of 20th-century philosophy is often written as an account of the development of one or both of these schools, as well as their overt or covert mutual hostility. What is often left out of this history, however, is the relationship between the two European schools and a third significant philosophical event: the birth and development of pragmatism, the indigenous philosophical movement of the United States. Through a careful analysis of seminal figures and central texts, this book explores the mutual intellectual influences, convergences, and differences between these three revolutionary philosophical traditions. The essays in this volume aim to show the central role that pragmatism played in the development of philosophical thought at the turn of the twentieth century, widen our understanding of a seminal point in the history of philosophy, and shed light on the ways in which these three schools of thought continue to shape the theoretical agenda of contemporary philosophy.

Book Reviews - Pragmatism and the European Traditions by Maria Baghramian

» Have you read this book? We'd like to know what you think about it - write a review about Pragmatism and the European Traditions book by Maria Baghramian and you'll earn 50c in Boomerang Bucks loyalty dollars (you must be a Boomerang Books Account Holder - it's free to sign up and there are great benefits!)

Maria Baghramian is Professor of American Philosophy at University College Dublin and current Head of School of Philosophy. She was elected a Member of the Royal Irish Academy in 2010 and was Fulbright Scholar in Harvard in 2014. Her research and publications, supported by the Irish Research Council, focus on Contemporary American Philosophy and the topics of relativism and disagreement. Sarin Marchetti is Assistant Professor at Sapienza Universita di Roma, where he teaches Moral Theories. He has written on ethics, metaphilosophy, Pragmatism, and the History of Analytic Philosophy. He is the author of Ethics and Philosophical Critique in William James (2015) and co-editor of Facts and Values: The Ethics and Metaphysics of Normativity (with G. Marchetti, 2016).