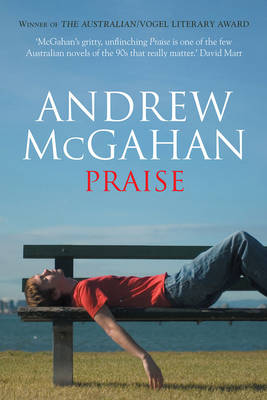 Winner of the Australian/Vogel's Literary Award 1991.

Praise is an utterly frank and darkly humorous novel about being young in the Australia of the 1990s. A time when the dole was easier to get than a job, when heroin was better known than ecstasy, and when ambition was the dirtiest of words. A time when, for two hopeless souls, sex and dependence were the only lifelines.

'McGahan's book is a bracing slap in the face to conventional platitudes and hypocrisies.' - The Australian

'Praise is one of those books that takes a hefty bite out of a piece of subject matter, chews it to a pulp and then spits it out.' - Peter Craven

'A tour de force. revelation of life in the slow lane of drugs and sex and alcohol.' - The Weekend Australian

Winner of The Australian/Vogel Literary Award and the Commonwealth Writers' Prize for Best First Book in the Pacific Region. Shortlisted for the Victorian Premier's Literary Award, the Adelaide Festival Awards for Literature and the Canada-Australia Literary Award.

» Have you read this book? We'd like to know what you think about it - write a review about Praise book by Andrew McGahan and you'll earn 50c in Boomerang Bucks loyalty dollars (you must be a Boomerang Books Account Holder - it's free to sign up and there are great benefits!)

Andrew McGahan was born in Dalby, Queensland, and now lives in Victoria. His first novel Praise (1992) won The Australian/Vogel Literary Award and the regional prize for best first book in the Commonwealth Writers' Prize. His second novel was the prequel 1988 (1995), and his third novel Last Drinks (2000) was shortlisted for multiple awards, including The Age Book of the Year and the Courier Mail Book of the Year, and won a Ned Kelly award for crime writing. In 2004, The White Earth was published and won the Miles Franklin Literary Award, the Commonwealth Writers' Prize for the South East Asia and South Pacific region, The Age Book of the Year (Fiction) and the Courier Mail Book of the Year Award. It was also shortlisted for the Queensland Premier's Literary Awards. McGahan's fifth novel, Underground, was published in 2006 and was shortlisted in the Queensland Premier's Prize for fiction and for the Aurealis Award. In 2009, Wonders of a Godless World was published to acclaim and won the Aurealis Award. McGahan's award-winning writing also includes stage plays and the screenplay for the movie version of Praise. In 2011, McGahan launched his children's book series, the Ship Kings. The Coming of the Whirlpool was shortlisted for the Children's Book Council of Australia Book of the Year award - older readers, for the Indie Awards, for the WA Premier's Book Award, was a finalist in the Aurealis Awards and was longlisted for the Gold Inky for an Australian YA book. The second novel in the Ship King series - Voyage of the Unquiet Ice was published in 2012.

A Preview for this title is currently not available.
More Books By Andrew McGahan
View All