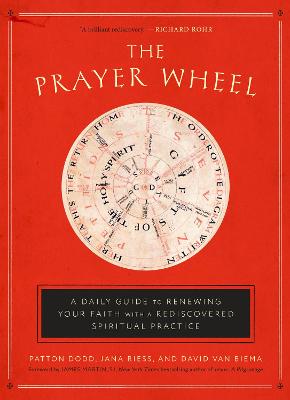 All people of faith struggle at times to maintain a meaningful prayer life, a loss felt all the more keenly in times like ours of confusion, political turbulence, and global calamity. The Prayer Wheel introduces an ancient prayer practice that offers a timeless solution for the modern faithful.
The Prayer Wheel is a modern interpretation of the Liesborn Prayer Wheel, a beautiful, almost wholly forgotten, scripture-based mode of prayer that was developed in a 12th-century monastery. The Liesborn Prayer Wheel resurfaced in 2015 in a small private gallery near New York's Metropolitan Museum of Art. It faithfully and beautifully presents seven prayer paths for personal or group use. Each path invites contemplation on the "big ideas" of the Christian faith--the Lord's Prayer, the Beatitudes, the gifts of the Holy Spirit, and key words from the life of Christ.
In the tradition of lectio divina and walking a labyrinth, The Prayer Wheel simply and directly takes readers into a daily, wholly unique encounter with God. As the prayers in this book unfold, readers will find an appealing guide for contemplation, a way of seeing God in new ways, and an essential new tool for Christian formation.

» Have you read this book? We'd like to know what you think about it - write a review about Prayer Wheel book by Patton Dodd and you'll earn 50c in Boomerang Bucks loyalty dollars (you must be a Boomerang Books Account Holder - it's free to sign up and there are great benefits!)

DAVID VAN BIEMA was head religion writer at TIME from 1999 to 2009, where he wrote 25 cover stories for the magazine, as well as covers for Life magazine, People, and the Washington Post. His recent work has appeared in TIME, the Washington Post, TheAtlantic.com, and the Religion News Service. He is the author of the book Mother Teresa- The Life and Works of a Modern Saint. JANA RIESS is an editor and writer who holds degrees in religion from Wellesley College, Princeton Theological Seminary, and Columbia University. She is a senior columnist for Religion News Service and speaks often to the media about issues pertaining to religion in America. PATTON DODD is a writer and editor whose work has appeared in The Wall Street Journal, Washington Post, TheAtlantic.com, CNN.com, Financial Times, Newsweek, Slate, Christianity Today, The Shambhala Sun, and more. He has also appeared on a range of television and radio shows, including Hannity, The Laura Ingraham Show, ESPN Radio, and NPR.