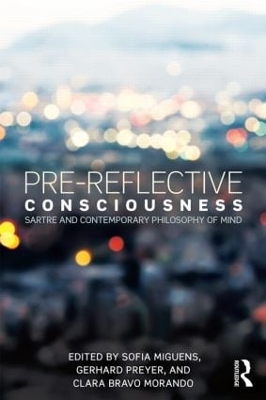 Sartre and Contemporary Philosophy of Mind

Pre-reflective Consciousness: Sartre and Contemporary Philosophy of Mind delves into the relationship between the current analytical debates on consciousness and the debates that took place within continental philosophy in the twentieth century and in particular around the time of Sartre and within his seminal works.

Examining the return of the problem of subjectivity in philosophy of mind and the idea that phenomenal consciousness could not be reduced to functional or cognitive properties, this volume includes twenty-two unique contributions from leading scholars in the field. Asking questions such as: » Have you read this book? We'd like to know what you think about it - write a review about Pre-reflective Consciousness book by Sofia Miguens and you'll earn 50c in Boomerang Bucks loyalty dollars (you must be a Boomerang Books Account Holder - it's free to sign up and there are great benefits!)

Sofia Miguens is a Professor in the Department of Philosophy of the University of Porto, Portugal. She is the Founder and Principal Investigator of MLAG (Mind, Language and Action Group), and the author of six books. Gerhard Preyer is Professor of Sociology at Goethe-University Frankfurt am Main, Germany. Among his publications are Intention and Practical Thought and Interpretation, Language and the Social Philosophical Articles, Donald Davidson's Philosophy: From Radical Interpretation to Radical Contextualism. He is editor of ProtoSociology. An International Journal of Interdisciplinary Research www.protosociology.de Clara Bravo Morando is a graduate student (PhD, Philosophy) at the University of Porto, Portugal.

A Preview for this title is currently not available.
More Books By Sofia Miguens
View All