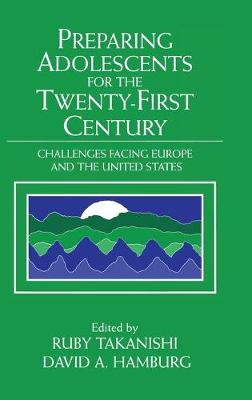 Preparing Adolescents for the Twenty-First Century

Description - Preparing Adolescents for the Twenty-First Century by Ruby Takanishi

Early adolescence, a critically important developmental phase in the lives of young people, has been neglected in terms of its potential to prevent educational and health problems. Preparing Adolescents for the Twenty-First Century: Challenges Facing Europe and the United States attempts to address this neglect by focusing on cross-national perspectives and linking fundamental research on adolescent development to the challenges of preparing young people for adult life. This volume's contributors describe the theory, design, and implementation of innovative comprehensive education and health approaches. The contributors give serious consideration to increasing the positive influence of education in promoting literacy for a high-technology economy, healthy lifestyles, and responsible citizenship. Co-editor David Hamburg was awarded the Presidential Medal of Freedom on September 9, 1996.

» Have you read this book? We'd like to know what you think about it - write a review about Preparing Adolescents for the Twenty-First Century book by Ruby Takanishi and you'll earn 50c in Boomerang Bucks loyalty dollars (you must be a Boomerang Books Account Holder - it's free to sign up and there are great benefits!)


A Preview for this title is currently not available.
More Books By Ruby Takanishi
View All