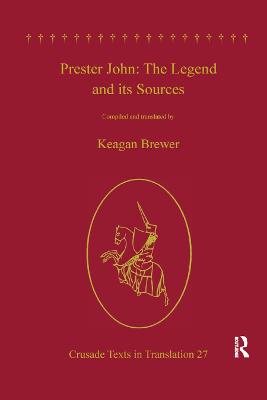 Prester John: The Legend and its Sources

Description - Prester John: The Legend and its Sources by Keagan Brewer

The legend of Prester John has received much scholarly attention over the last hundred years, but never before have the sources been collected and coherently presented to readers. This book now brings together a fully-representative set of texts setting out the many and various sources from which we get our knowledge of the legend. These texts, spanning a time period from the Crusades to the Enlightenment, are presented in their original languages and in English translation (for many it is the first time they have been available in English). The story of the mysterious oriental leader Prester John, ruler of a land teeming with marvels who may come to the aid of Christians in the Levant, held an intense grip on the medieval mind from the first references in twelfth-century Crusader literature and into the early-modern period. But Prester John was a man of shifting identity, being at different times and for different reasons associated with Chingis Khan and the Mongols, with the Christian kingdom of Ethiopia, with China, Tibet, South Africa and West Africa. In order to orient the reader, each of these iterations is explained in the comprehensive introduction, and in the introductions to texts and sections. The introduction also raises a thorny question not often considered: whether or not medieval audiences believed in the reality of Prester John and the Prester John Letter. The book is completed with three valuable appendices: a list of all known references to Prester John in medieval and early modern sources, a thorough description of the manuscript traditions of the all-important Prester John Letter, and a brief description of Prester John in the history of cartography.

Other Editions - Prester John: The Legend and its Sources by Keagan Brewer Book Reviews - Prester John: The Legend and its Sources by Keagan Brewer

» Have you read this book? We'd like to know what you think about it - write a review about Prester John: The Legend and its Sources book by Keagan Brewer and you'll earn 50c in Boomerang Bucks loyalty dollars (you must be a Boomerang Books Account Holder - it's free to sign up and there are great benefits!)


A Preview for this title is currently not available.
More Books By Keagan Brewer
View All

The Conquest of the Holy Land by Salah al-Din: A critical edition and translation of the anonymous Libellus de expugnatione Terrae Sanctae per Saladinum
$249.48 $252.00