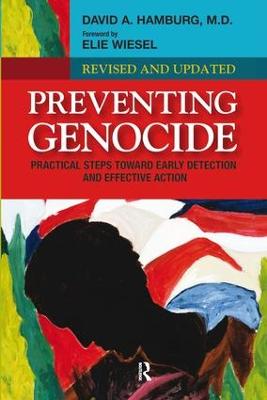 Genocide has been called 'a problem from hell' and despite vehement declarations of 'never again' it's a problem that continues to plague the world. From the beginning of history to the most recent massacres in Bosnia, Rwanda, and Darfur, genocide defies resolution. And given today's worldwide access to highly lethal weapons and advanced communications technology facilitating incitement to hate, we can expect to see this problem grow. It is often claimed that genocide occurs without warning, taking both local and global communities by surprise. Yet, as David Hamburg convincingly shows, we have had long-term advance knowledge of most modern genocides dating back to the early 20th century Armenian tragedy in Turkey and before. In this book, Dr. Hamburg applies a groundbreaking new perspective-the medical model of prevention-to the scourge of genocide in the world. Preventing genocide is not only possible, Dr Hamburg contends, but essential given its high cost in lives, human rights, and international security. Here he maps out numerous practical steps to recognise genocidal conflicts early and stem their tides of violence before they become acute. He also outlines several institutions in place and programs underway at the UN, EU, and NATO devoted to preventing future genocides before they erupt. He draws lessons both from missed opportunities and successful experiences and makes many constructive suggestions about strengthening international institutions, governments, and NGOs for this purpose.

Other Editions - Preventing Genocide by David A. Hamburg » Have you read this book? We'd like to know what you think about it - write a review about Preventing Genocide book by David A. Hamburg and you'll earn 50c in Boomerang Bucks loyalty dollars (you must be a Boomerang Books Account Holder - it's free to sign up and there are great benefits!)

David A. Hamburg is DeWitt Wallace Distinguished Scholar at Weill Cornell Medical College. He is President Emeritus of the Carnegie Corporation of New York, where he served as President from 1982 to 1997. He is the author of Today's Children: Creating a Future for a Generation in Crisis (1992); No More Killing Fields (2002); and Learning to Live Together (2004).

A Preview for this title is currently not available.
More Books By David A. Hamburg
View All