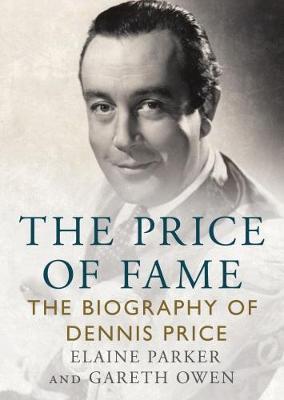 The Price of Fame

The Biography of Dennis Price

Description - The Price of Fame by Elaine Parker

Charming, erudite, and the very personification of the English gentleman, Dennis Price was without doubt also one of the most promising and talented newcomers to the world of theatre and film in the late 1930s, and he arguably reached his screen best in the classic Ealing comedy 'Kind Hearts and Coronets'. Huge praise was lavished upon him and he was compared alongside theatrical contemporaries Laurence Olivier, John Gielgud and Ralph Richardson as being destined for great things. Scene-stealing performances followed over the next few decades in such differing films as 'The Dancing Years', 'The Intruder', 'Private's Progress', 'The Naked Truth', 'Tunes of Glory', 'Tamahine' and 'Theatre of Blood', to name but a few. Though whilst his career was blossoming his private life was going through turmoil when, after one of his several affairs was discovered by his wife, he faced the shame of divorce, separation from his two children and when coupled with significant tax bills, it all proved too much and the actor attempted suicide. Eventually bouncing back, he reinvented himself as a character actor and appeared in scores of notable films-and was often the best thing in them!

Book Reviews - The Price of Fame by Elaine Parker

» Have you read this book? We'd like to know what you think about it - write a review about Price of Fame book by Elaine Parker and you'll earn 50c in Boomerang Bucks loyalty dollars (you must be a Boomerang Books Account Holder - it's free to sign up and there are great benefits!)

Elaine Parker is a life-long film buff and huge fan of Dennis Price, with an in-depth knowledge of his life and career. This is her first book. Gareth Owen has authored and/or ghosted 16 books on film, film studios and film personalities including four volumes of autobiography with Sir Roger Moore.

A Preview for this title is currently not available.
More Books By Elaine Parker
View All