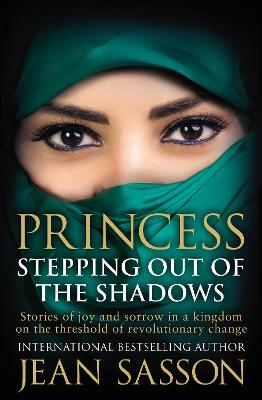 Princess: Stepping Out Of The Shadows

Description - Princess: Stepping Out Of The Shadows by Jean Sasson

The latest book in the incredibly popular PRINCESS series. Stepping Out of the Shadows will focus on equal opportunities for women in the middle east - and how, despite recent reforms, Saudi women still suffer horrific physical and psychological abuse.

In the international bestseller, Princess- The True Story of Life Behind the Veil in Saudi Arabia, Princess Al-Sa'ud and the acclaimed author Jean Sasson began a remarkable series of books. Now, more than twenty-five years later, this compelling journey continues as we follow the fortunes and the dazzling life of the Princess, her friends and her family.

But, of course, there is a less glamorous, much darker side to this engaging series, and in Stepping Out of the Shadows Jean and the Princess focus their attention on how, despite positive news on civil rights reforms, Saudi women still suffer physical and psychological abuse and have little legal protection due to the archaic guardianship laws of the land. So, although this is a kingdom on the threshold of revolutionary change - change spearheaded by the young Saudi Crown Prince who is keen to modernize his country - any thoughts of equal rights and the chance to lead an independent life remain little more than dreams for most Saudi women.

Whilst the Princess acknowledges and welcomes the reforms that are on the horizon, through stories of joy and sorrow, we see how she is determined to continue to fight for equal rights for women in this, her beloved kingdom.

Other Editions - Princess: Stepping Out Of The Shadows by Jean Sasson Book Reviews - Princess: Stepping Out Of The Shadows by Jean Sasson

» Have you read this book? We'd like to know what you think about it - write a review about Princess: Stepping Out Of The Shadows book by Jean Sasson and you'll earn 50c in Boomerang Bucks loyalty dollars (you must be a Boomerang Books Account Holder - it's free to sign up and there are great benefits!)

Jean Sasson grew up in a small town in America's deep south before moving to the Middle East in 1978 to work at a prestigious royal hospital in Riyadh, Saudi Arabia. In 1985, she met Princess Sultana, who inspired the widely acclaimed Princess Trilogy. Jean later worked as freelance writer in Lebanon and Kuwait, conducting interviews with Kuwaitis who survived the first Gulf war, as well as high ranking Kuwaiti officials before, during and after the War. Her affection for the Middle East has been the motivation for a number of her books and Jean has spent her career sharing the personal stories of many courageous women. Princess: Stepping Out Of The Shadows is the latest book in the bestselling Princess series.

A Preview for this title is currently not available.
More Books By Jean Sasson
View All