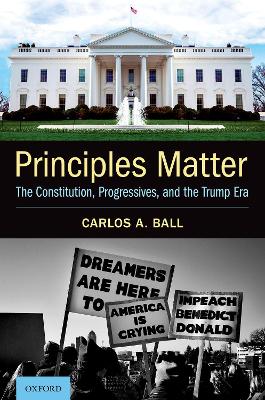 Principles Matter: The Constitution, Progressives, and the Trump Era

Description - Principles Matter: The Constitution, Progressives, and the Trump Era by Carlos A. Ball

Progressives who opposed the Trump administration's policies found themselves repeatedly relying on constitutional principles grounded in federalism, separation of powers, and free speech to resist the federal government. Although many progressives had either criticized or underemphasized those principles before Trump, the principles became vital to progressive causes after Trump was elected. Using dozens of examples from the ways in which
Trump abused presidential powers, this book explains how the three sets of principles can help mitigate the harms that autocratic leaders in the Trump mold can inflict on both democratic institutions and
vulnerable minorities. In doing so, the book urges progressives to follow this rule of thumb in the post-Trump era: If a constitutional principle was worth deploying to resist Trump's harmful policies and autocratic governance, then it is worth defending in the post-Trump era even if it makes the short-term attainment of progressive objectives more difficult. This type of principled constitutionalism is essential not only because being principled is good in and of itself, but also because being
principled in matters related to federalism, separation of powers, and free speech will help both advance progressive causes over the long run and reduce the threats posed by future autocratic leaders
in the Trump mold to our system of self-governance, to our democratic values, and to traditionally subordinated minorities. Going forward, progressives should promote and defend constitutional principles grounded in federalism, separation of powers, and free speech regardless of whether they have an ally or an opponent in the White House.

Book Reviews - Principles Matter: The Constitution, Progressives, and the Trump Era by Carlos A. Ball

» Have you read this book? We'd like to know what you think about it - write a review about Principles Matter: The Constitution, Progressives, and the Trump Era book by Carlos A. Ball and you'll earn 50c in Boomerang Bucks loyalty dollars (you must be a Boomerang Books Account Holder - it's free to sign up and there are great benefits!)


A Preview for this title is currently not available.
More Books By Carlos A. Ball
View All

The Queering of Corporate America: How Big Business Went from LGBT Adversary to Ally
$61.05 $67.83

The Queering of Corporate America: How Big Business Went from LGBTQ Adversary to Ally
$36.06 $40.07