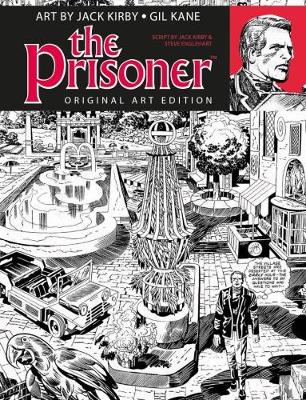 Drawn by two of the true great comic book legends, Jack Kirby and Gil Kane, this is a facsimile collection of a 'long-lost', unpublished legendary comic book based on the cult classic 1967 British TV show,

The Prisoner, co-created, written, directed and starring Patrick McGoohan (Scanners, Braveheart). First released in 1967, The Prisoner was a controversial 1967 UK television series. The comic, originally produced by Marvel Comics in the 70s, was the only attempt to adapt the TV show for a comic book audience. Marvel first approached Jack Kirby to adapt the comic, but when not entirely happy with the end result they decided to try a different tact and commissioned Steve Englehart to write the script and Gil Kane to draw it.

Ultimately it was decided to abandon the project and the two comic strips were consigned to annals of comic book history where over time they became the stuff of legend and known as one of the great-unpublished comic books of all times. This collection, presented for the very first time, is the definitive artist's edition of those long-lost pages of artwork drawn by two of the truly greatest comic legends. Lovingly scanned from the original artwork and uncorrected, these are facsimile scans of those original pages are exactly as drawn by the two great men.

» Have you read this book? We'd like to know what you think about it - write a review about Prisoner Jack Kirby Gil Kane Art Edition book by Jack Kirby and you'll earn 50c in Boomerang Bucks loyalty dollars (you must be a Boomerang Books Account Holder - it's free to sign up and there are great benefits!)

Jack Kirby was regarded as one of the major innovators of comic books as one of its most prolific and influential creators. He, along with Joe Simon and Stan Lee, created the highly successful superheroes such as Captain America, the Fantastic Four, the X-Men, and the Hulk. The Lee-Kirby titles garnered high sales and critical acclaim. Called "the William Blake of comics," in 1987 Kirby was one of the three inaugural inductees of the Will Eisner Comic Book Hall of Fame. Marvel, not entirely happy with the end result of the Prisoner work by Kirby, decided to commission Steve Englehart to write the rest of the comic. He was known for his work for DC, Malibu, Eclipse Comics, Topps, Valiant and Warren Publishing and co-created Shang-Chi Master of Kung Fu for Marvel Comics.