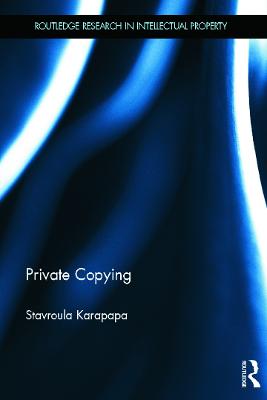 The Scope of User Freedom in EU Digital Copyright

The scope and legitimacy of private copying is one of the most highly contested issues in digital copyright. While private copying was practiced in the analogue world too, it was tolerated due to its minimal impact and to the difficulties related to its monitoring. Yet, its permissibility is ambiguous in the digital environment; this is because digitalisation has enabled ordinary individuals to make and share copies of copyrighted works easily, for no cost and with no degradation in terms of quality. Scholars and lawmakers stress the decisive role of private copying in striking an adequate balance between the freedom to use copyrighted works and the protection of the rightholders' interests in the digital world. In Europe, private copying is explicitly permitted under Article 5(2)(b) of Directive 2001/29/EC on the harmonisation of certain aspects of copyright and related rights in the information society and the national laws that implement it. Despite being a lawful activity in the great majority of European Member States, digital private copying remains a highly controversial phenomenon and the scope of digital private copying remains legally unclear.
This book offers an original analysis of private copying and determines the actual scope of private copying as an area of end-user freedom in the digital world. In particular, it examines the permissibility of digital private copying with a view to clarify the legal uncertainty as to its scope. The basis of this examination is Article 5(2)(b) of the Information Society Directive. Under this Article, the use of copyrighted works ought to be 'private' and 'non-commercial' to be permitted; these concepts, however, do not translate well, and tend to be less sharp, in the digital environment. Even though their meaning seems clear and self-evident, their legal boundaries are in practice very vague and not settled by law. » Have you read this book? We'd like to know what you think about it - write a review about Private Copying book by Stavroula Karapapa and you'll earn 50c in Boomerang Bucks loyalty dollars (you must be a Boomerang Books Account Holder - it's free to sign up and there are great benefits!)

Stavroula Karapapa is a lecturer at Brunel University, UK.

A Preview for this title is currently not available.
More Books By Stavroula Karapapa
View All

Defences to Copyright Infringement: Creativity, Innovation and Freedom on the Internet
$162.86 $180.95